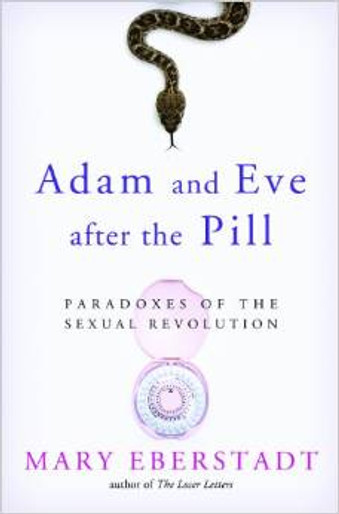 Secular and religious thinkers agree: the sexual revolution is one of the most important milestones in human history. Perhaps nothing has changed life for so many, so fast, as the severing of sex and procreation. But what has been the result?

This ground-breaking book by noted essayist and author Mary Eberstadt contends that sexual freedom has paradoxically produced widespread discontent. Drawing on sociologists Pitirim Sorokin, Carle Zimmerman, and others; philosopher G.E.M. Anscombe and novelist Tom Wolfe; and a host of feminists, food writers, musicians, and other voices from across today's popular culture, Eberstadt makes her contrarian case with an impressive array of evidence. Her chapters range across academic disciplines and include supporting evidence from contemporary literature and music, women's studies, college memoirs, dietary guides, advertisements, television shows, and films.

Adam and Eve after the Pill examines as no book has before the seismic social changes caused by the sexual revolution. In examining human behavior in the post-liberation world, Eberstadt provocatively asks: Is food the new sex? Is pornography the new tobacco?

Adam and Eve after the Pill will change the way readers view the paradoxical impact of the sexual revolution on ideas, morals, and humanity itself.

Mary Eberstadt is a research fellow at the Hoover Institution and consulting editor to Policy Review. Her essays and reviews have appeared in a variety of newspapers, magazines, and online journals including First Things, the Weekly Standard, National Review, National Review Online, the Claremont Review of Books, the London Times, and the Wall Street Journal. She is author of several books including the satirical novel The Loser Letters: A Comic Tale of Life, Death, and Atheism.

A Treasury of Serbian Orthodox Spirituality, Volume V: Prayers by the Lake

Adult Christ at Christmas, An

A Treasury of Serbian Orthodox Spirituality, Volume IV: The Struggle for Faith

Against the Current - Reflections on the Misuse of Religion