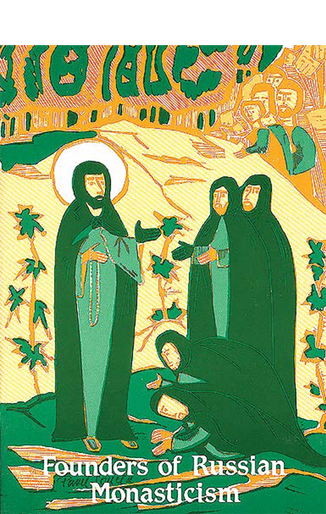 This work tells the biographies of six Russian monks who helped shape the face of monasticism in that nation, as well as the nation itself. Their stories cover a span of about 850 years.

St. Anthony of the Caves in Kiev (b.983 AD) first introduced the concept of personal asceticism to Russia, which had only become formally Christian five years after his birth.

St. Theodosius of the Caves in Kiev (b.1008 AD) was an early disciple of St. Anthony's and was mainly responsible for launching communal monasticism in Russia.

St. Sergius of Radonezh (b.1314 AD) stopped four civil wars, influenced the poor and wealthy, and organized a monastic settlement whose members over the next 200 years started a movement by founding 150 monasteries in the forests and 100 in the cities.

St. Nilus of Sora (b.1433-d.1508) and St. Joseph of Volotsk (b.1439-d.1515) established two complementary schools of monastic thought which eventually came into conflict. St. Nilus emphasized monastic poverty, freedom for each individual monk to develop their own spiritual disciplines, and non-violent opposition to heresy, thereby founding the "non-possessors." St. Joseph emphasized the use of possessions to help the poor and needy, a common rule and practice for all monks in the same monastery, and aggressive suppression of heresy, thereby founding the "possessors."

St. Seraphim of Sarov (b.1759), who largely spent his monastic life alone in the forest, was known for being a man of "light" and "joy" because of his experience and emphasis on being filled with the Holy Spirit. He eventually became a spiritual mentor to the thousands of pilgrims that came to him in search of guidance.

The book is beautifully illustrated by etchings and engravings that almost have the feel of classic iconography. It is written in simple plain language and is geared for young people, but it can easily serve as a moving introduction to the topic for adults.