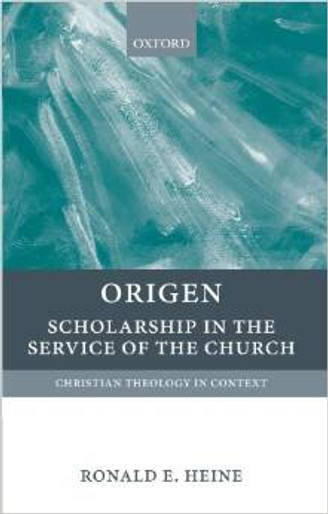 This book is about the life and thought of Origen (c.185-254 A.D.), the most important Greek-speaking Christian theologian and Biblical scholar in antiquity. His writings included works on the text of the Bible, commentaries and sermons on most of the books of the Bible, a major defense of the Christian faith against a philosophical skeptic, and the first attempt at writing systematic theology ever made. Ronald E. Heine presents Origen's work in the context of the two urban centers where he lived-Alexandria in Egypt, and Caesarea in Palestine. Heine argues that these urban contexts and their communities of faith had a discernable impact on Origen's intellectual work.

The study begins with a description of Roman Alexandria where Origen spent the first forty-six years of his life. The thought of the Alexandrian Christian community in which Origen was born and in whose service he produced his first written works is examined from the limited resources that have survived. The remains of Origen's writings produced in Alexandria provide information about his early theological views as well as the circumstances of his life in Alexandria. Heine discusses the issues of the canon and text of the Bible used by Origen and the Alexandrian Christian community and the special work called the Hexapla which he produced on the text of the Septuagint.

Origen's later life in Caesarea was shaped by pastoral as well as teaching duties. These responsibilities put him in contact with the city's large Jewish population. Heine argues that the focus of Origen's thought shifts in this period from his earlier Alexandrian occupation with Gnostic issues to the complex questions concerning the relationship between church and synagogue and the ultimate fate of the Jews. In his final years it appears that Origen was rethinking some of the views he had espoused in his earlier work.

A Treatise on Prayer: An Explanation of the Services Conducted in the Orthodox Church

Readers' Service Book of the Hours of the Orthodox Church