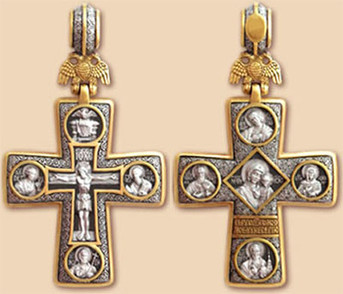 The Imperial Cross of St Petersburg. Reversible. The Cross is suspended from the bail by a "Double Headed Eagle." The "Double Headed Eagle" was originally the symbol of the Byzantine Empire, which was considered the second Rome. The eagle has two heads, one looking East and the other looking West. After the fall of Constantinople, Russia considered itself the successor of the Empire and the Third Rome. Thereby adopting the "Double Headed Eagle" as its symbol. In the top circular panel is a dove representing the Holy Spirit perched on an open gospel book. The left circle features St Peter, the Chief of the Apostles. To the right is St John the Beloved. St John the Baptist is on the bottom cicular panel. Christ, in the Russian tradition, is often portrayed "alive" on the Cross. Above his image are the Greek letters IC XC for Jesus Christ. The VERSO contains in a diamond shape the Virgin of Kazan--the Protectress of Russia. The icon of the Kazan Mother of God is the most beloved icon of the Russian people. Many miracles are attributed to this icon--including the saving of St Petersburg from Hitler and the German invasion of the Second World War. Below is a prayer of intercession to the Virgin Mary. The top circular panel on the reverse side features St Alexander Nevsky, the founder of modern Russian State and the Patron of St Petersburg. To the left is St John of Kronstadt, the Saint the Island of Kronstadt on the route to St Petersburg from the Gulf of Finland. To the right is St Catherine of Alexandra, patroness of the famed Empress Catherine the Great. The bottom panel features St Peter the Apostle, the Patron Saint of Peter the Great, along with a representation of the Church of SS Peter and Paul where the city of St Petersburg was founded.

The Life and Miracles of Blessed Xenia of St. Petersburg