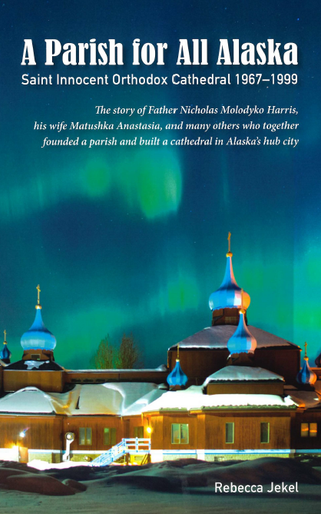 This is the story of Father Nicholas Molodyko Harris, his wife Matushka Anastasia, and many others who together founded a parish and built a cathedral in Alaska's hub city.

"In every generation, there are people who stand out above the crowd. People who do extraordinary things in a seemingly ordinary way, without fanfare, without flattery, without guile. They seek only to serve the Lord as best they can, and they impact everyone they meet in such an unusual way that the encounter is always remembered.

Mitred Archpriest Nicholas Molodyko Harris is such a person. He was sent to Alaska in 1967 to establish a parish in the Anchorage area, and he never looked back. He served under many bishops and Metropolitans of the Orthodox Church in America. He did as he was asked without complaint and with a sense of duty not often found in our modern era. Not only this, but his entire family also joined him in this sacrificial life and were a contributing part of the epic saga that is the history of Saint Innocent Cathedral in Anchorage. To this day, it is not possible to go to any part of the Alaskan Diocese and not hear someone fondly remember an encounter with Father Nicholas and Matushka Anastasia. Remember, as you read these pages, you are not only reading a history of the Diocese of Alaska, but also the life of a priest and his family and their impact on a vast territory of Orthodox people who were truly the first Orthodox Christians in this Hemisphere." — Bishop David Mahaffey of Sitka and Alaska, from the Foreword

A Child's Guide to Confession