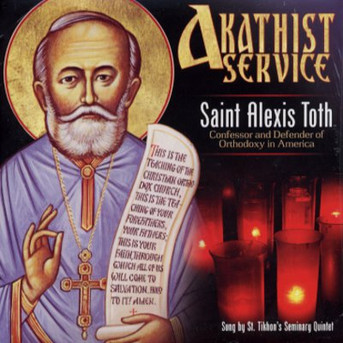 It is with great joy we sing and share the Akathist to our Father among the Saints, St. Alexis Toth, a confessor and defender of Orthodoxy in America. St. Alexis was a teacher and enlightener of the Orthodox faith in America. Under his leadership, Orthodoxy gained a firm foothold in America. His missionary work eventually brought 17 parishes to the Orthodox Faith with an estimated 29,000 people. When St. Patriarch Tikhon was recalled to Russia, he “entrusted his work to the hands of Father Toth in whom he had the greatest confidence.” He has been called the Father of Orthodoxy in America and in official periodicals (among them The New Catholic Encyclopedia) it has been estimated that “more than half of 400,000 Russian Orthodox in the USA are descendents of his converts.” St. Alexis died on May 7th, 1909 after suffering from an ailment for five months. When his body was exhumed in 1916 to be placed in the stone mausoleum behind the Church, it was found to be incorrupt. As one eye witness stated: “When St. Alexis’ coffin was opened, it was seen that his body appeared as it might if he had just reposed the same day.’ St. Alexis was glorified at St. Tikhon’s Monastery during the 90th Memorial Day Pilgrimage in 1994. Today, his mostly incorrupt remains reside at St. Tikhon’s Monastery.

The Life, Service, & Akathist of Our Father Alexis of Wilkes-Barre

Akathist to St. John Archbishop of Shangai and San Francisco