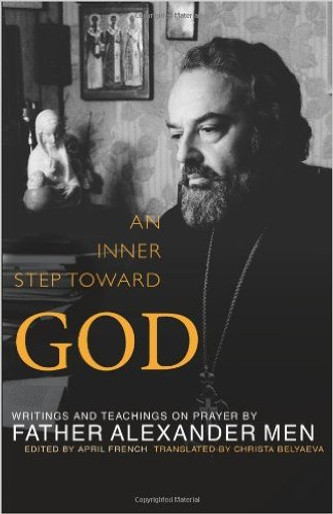 This book is for any Christian who desires a more regular prayer practice and a deeper connection with God.

Available for the first time in English, this collection of Father Alexander Men's prayers and teachings and writings on prayer center on the theme of taking "an inner step of faith" toward God. Many topics are covered including prayer as loving response to God, the body and prayer, prayer as sacramental encounter, meditation in prayer, and exercises that may enhance prayer.

Father Alexander Men (1935-1990_ was a popular Russian Orthodox priest, author of Son of Man, and spiritual teacher in the former USSR. After his high profile murder in 1990, his legacy has continued to grow in Russia and around the world.

April French is one of the foremost North American authorities on Fr. Alexander. She earned an MA from Regent College and is a PHD candidate at Brandeis University. For many years Christa Belyaeva lived in Moscow, where she converted to Orthodoxy and worshipped at the Church of the Dormition with people who knew Fr. Alexander personally.

The Jesus Prayer A Gift from the Fathers

Akathist to the Righteous Joachim and Anna for Blessed Married Life

Akathist to the Mother of God Inexhaustible Cup