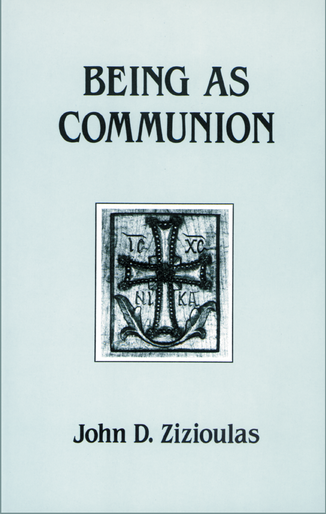 The voice of Metropolitan John Zizioulas may turn out to be the fresh voice for which theology, and especially the study of the Christian Church, have long been waiting. In the context of a complete theology, which includes extended consideration of the major theological topics--the Trinity, Christology, eschatology, ministry, and sacrament, but above all, the Eucharist--the author propounds a fresh understanding, based on the early Fathers and the Orthodox tradition, of the concept of person and of the Church itself. His consideration of the local church as "catholic" in the literal sense, and the need to understand the universal Church not as a superstructure but as the communion of all Churches, provides the program for the ecclesiology of the future. The French Dominican priest Yves Congar has written that he considers the author to be "one of the most original and profound theologians of our epoch" and that he "presents a penetrating and coherent reading of the tradition of the Greek Fathers."

About the Author: John Zizioulas is Metropolitan of Pergamon in the Ecumenical Patriarchate of Constantinople.

Being as Communion is part of the CONTEMPORARY GREEK THEOLOGIANS SERIES.

Other books included in the series are Hymn of Entry by Archimandrite Vasileios, The Deification of Man by Georgios I. Mantzaridis, Deification in Christ by Panayiotis Nellas, and The Freedom of Morality by Christos Yannaras.

The Rule of Preparation for Holy Communion