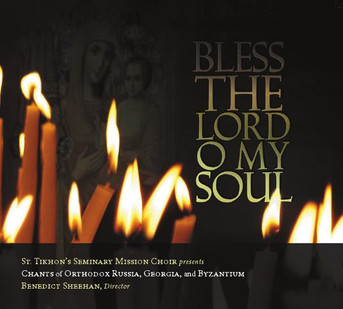 The chant of the Orthodox Church, an ancient and richly varied tradition, is characterized by a certain simplicity—even austerity—of expression, coupled with an ecstatic inner joy and radiance. The Orthodox Fathers refer to this quality, common to the whole spiritual and liturgical life of the Orthodox Church, as “sorrowful joy.” Unlike much of the music of the West from the past six or seven centuries, traditional Orthodox chant, remaining closely linked to the expression of liturgical texts, knows very little of either outward emotive drama or inner complexity of musical form. The real power and beauty of Orthodox chant lies in its capacity to quiet the mind and the senses, to soften the heart, and, with the cooperation of our free will, to prepare the soul to receive the incarnate Word of God within itself.

This recording presents a number of examples of traditional Orthodox chant, primarily from the Russian tradition, in various styles and arrangements. Featured prominently on the recording is the Russian style of chant known as Znamenny chant, which, despite three centuries of Western influence, the Russian church continued to recognize as the principal form of “canonical singing” all the way up to the Revolution. In recent decades, chant has experienced a significant revival all over the Orthodox world, both in the “old country” and the new, and this present recording from St. Tikhon’s Mission Choir is but one humble attempt to make these beautiful, uplifting, and transcendent melodies a little better known to English speakers.
—Benedict Sheehan, Director

Blueprints for the Little Church