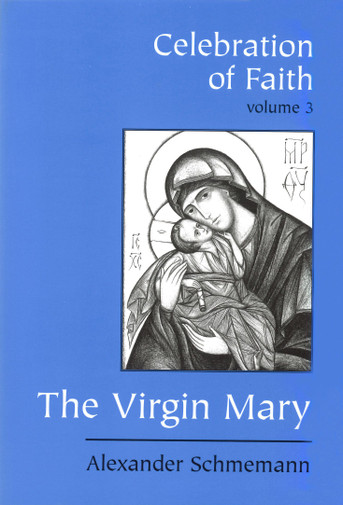 This volume, the third in a collection of sermons by Fr Alexander Schmemann, is on a topic that was particularly close to his heart: the Virgin Mary. The "Theotokos," as Mary is usually referred to among the Orthodox, figures prominently in Byzantine liturgical worship. While no single service is without one or more references to her, Eastern Orthodox theological manuals have little to say about Mary beyond repeating the primarily Christological titles affirmed by the Third Ecumenical Council--"Theotokos," "Birthgiver of God."

It is to the Eastern liturgical tradition, then, that one must turn for a more developed Mariology. Eastern hymnographers, drawing on Scripture, the early Christian Apocrypha and on a rich theological tradition, went far beyond the laconic definition of the Third Ecumenical Council. Fr Schmemann draws on all these to explain Mariology to a modern audience.

The first part of this volume consists of a series of sermons originally delivered in Russian over Radio Liberty. The message is direct and simple, addressed to a largely unchurched audience.

In the second part, comprised of chapters two through five, Fr Schmemann addresses an academic audience in a series of lectures entitled: "Mary: the Archetype of Mankind," "On Mariology in Orthodoxy," "Mary in Eastern Liturgy," and an especially insightful chapter entitled "Mary and the Holy Spirit."

About the Author: Fr Alexander Schmemann was a prolific writer, brilliant lecturer, and dedicated pastor. Former dean and professor of liturgical theology at St Vladimir’s Orthodox Theological Seminary, his insight into contemporary culture and liturgical celebration left an indelible mark on the Christian community worldwide.

Celebration of Faith, vol. I: I Believe...

Mary, Worthy of all Praise: Reflections on the Virgin Mary

Celebration of Faith, vol. I: I Believe...