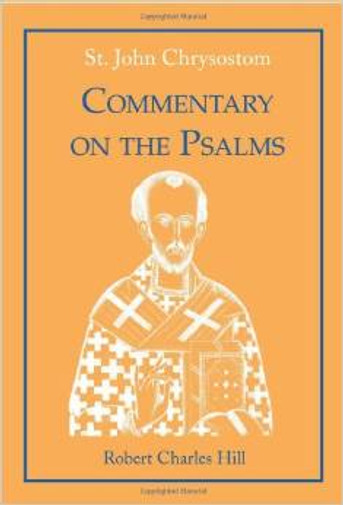 While St. John Christsostom may have commented on all 150 psalms in the Psalter, commentary has survived on only fifty-eight. In these volumes, Robert Charles Hill has prepared an excellent translation of the commentary- in Volume One Psalms 4-13, 44-50, and in this volume Psalms 109-150 (with the exception of the long Ps 119)- all appearing for the first time in English. In this work, probably composed while he was still in Antioch, Chrysostom's brilliance as an exegete of the "literal school" of Antioch shines forth, even as he works with the metaphorical language and imagery of the psalms. As Hill writes, "it is fascinating to watch Chrysostom ...coming to grips with this lyrical material, achieving some sense of comfort, and eventually devising- for the first time? -his own hermeneutical principles for coping with such texts." The extensive Introduction in Volume One covers basic issues on the commentary, including its origins, its relationship to Chrysostom's other exegetical work, his attitude to Scripture, and the theology spirituality and other moral accents of the commentary. Comment on Chrysostom's text is also given in endnotes, and indexes are provided in each volume.

Robert Charles Hill, of the University of Sydney, is well known for his studies on St. John Chrysostom that have appeared in numerous journals. In addition to his other books on theology and the Bible, his translation of Chrysostom's homilies on Genesis is part of the Fathers of the Church series.

Psalm 118: A Commentary by Saint Theophan the Recluse