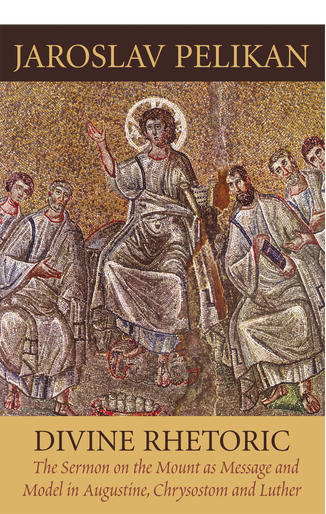 Of the many themes that Classical Antiquity and Early Christianity had in common, for all their profound differences, none was more influential than their love of language. It was the Greek and Roman rhetorical theorists who called the attention of later generations to the importance of speech and language. Likewise, when the author of the Fourth Gospel needed a comprehensive metaphor to describe the eternal significance of Jesus Christ, he turned to speech, calling him the Logos--the Word and Reason of God, through whom the universe was made and by whom it was upheld.

What would happen when these two systems of interpreting persuasive language collided--and yet in some sense converged? Author Jaroslav Pelikan, widely acknowledged as one of the most important living historians of Christian doctrine, answers that question. He examines three interpretations of the most universally acknowledged piece of rhetoric in the history of the West, the Sermon on the Mount: from the Latin and Catholic tradition (St Augustine), the Greek and Orthodox tradition (St John Chrysostom), and the Reformation and Protestant tradition (Martin Luther). Each is acknowledged in his tradition as a "prince of the pulpit." Together and yet separately, they illumine both the Sermon and the Speaker for anyone who still takes the challenge of the faith--and of language--seriously.

About the Author: Jaroslav Pelikan is Sterling Professor of History Emeritus at Yale University and is the author of more than thirty books.