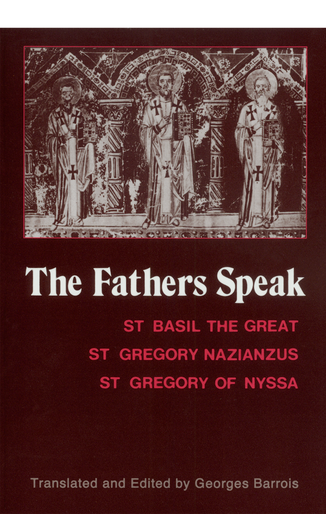 As Christians of the twenty first century study the Fathers of the Church, their writings (often in an unreadable English produced by clumsy translations) appear to us as foreboding, verbose, and somewhat closed within a world where theological contemplation replaces everyday reality. The Greek Fathers in particular have this reputation among students because they wrote relatively little about themselves, about the details of their own lives and the circumstances of daily life.

Here for the first time is an anthology of texts gathered almost exclusively from the personal correspondence between St Basil the Great, his close friend Gregory "the Theologian" and his younger brother St Gregory of Nyssa. These three men appear to us as real human beings, reveal the substance of their Christian vocation, uncover the program of their spiritual life, unveil the intellectual background of their use of Greek philosophy at the service of Christian theology, and explain the meaning of their ministry as monastic leaders and bishops of the Church.

Readers of this book will be able to contemplate the icons of these Fathers with a fuller understanding of the human reality which appears iconographically transfigured in frescoes and mosaics. Indeed, it is their genuinely human response to divine love and grace which has made them into "Holy Fathers” of the Church.

About the Author: Georges A. Barrois, Professor Emeritus at Princeton Theological Seminary and St Vladimir's Orthodox Theological Seminary, is a Biblical archaeologist and historian of medieval Latin. Among the many books and articles he has authored, he has contributed to a section of the Jerusalem Bible.

Reading Scripture with the Church Fathers