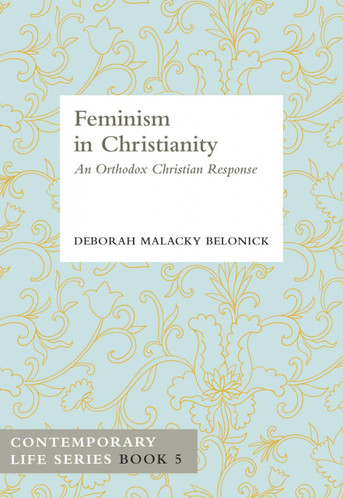 First published in 1983 by the Orthodox Christian Publications Center, this little book is by a modern woman who investigates a modern phenomenon, The Women's Movement, and its effects on religious thought. The author, Deborah Malacky Belonick, explores how feminist thought gave birth to feminist theology, and then contrasts the religious tenets embraced by feminist theologians with those held by Orthodox Christians.

The Women's Movement in the United States has had a profound effect on the realm of religion. As The Women's Movement began to be felt in other areas of American life, it soon became apparent that religious structures were not beyond feminist interest. Shortly after the movement began in the early 1960's, feminists decided that sexism had penetrated the Church throughout Christian history, and judged Christian denominations as having been patently unfair to women. Women began to scrutinize the structures of the Christian denominations, with their beliefs and theology, and concluded that all of Christendom had been trained by male chauvinism...

This essay has one purpose: to investigate the religious beliefs of feminized-Christians and to contrast them with Orthodox Christian theology. It is not the desire of the author to depreciate The Women's Movement in other areas of life; in many fields its effects have been beneficial. However when feminism left social problems and turned to religion, a revolution began, and this revolution has resulted in religious beliefs blatantly disparate with the teachings of the Orthodox Christian Church, with the gospel of Jesus Christ, and with the traditional moving of the Holy Spirit.

Women and the Priesthood

Women and Men in the Church