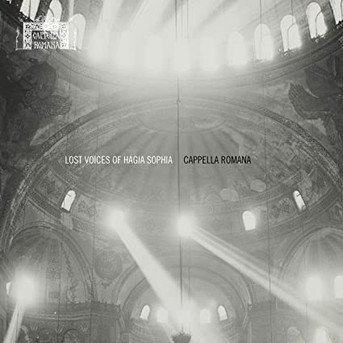 Lost Voices of Hagia Sophia is the first vocal album in the world to be recorded entirely in live virtual acoustics. It brings together art history, music history, performance, and technology to re-create medieval sacred sound in the cathedral of Hagia Sophia as an aural virtual reality. With a stunning reverberation time of over 11 seconds, the acoustics of Hagia Sophia were measured and analyzed, and auralized in real time on Cappella Romana’s performance by the Icons of Sound team at Stanford University (iconsofsound.stanford.edu). Lost Voices of Hagia Sophia presents more than 75 minutes of medieval Byzantine chant for the Feast of the Holy Cross in Constantinople, one of the greatest celebrations in the yearly cycle of worship at Hagia Sophia. This deluxe package (CD and Blu-ray) contains standard and high-resolution stereo and surround sound formats including Dolby Atmos, as well as a bonus track and a 24-minute documentary film.

Vocal ensemble Cappella Romana combines passion with scholarship in its exploration of early and contemporary music of the Christian East and West. Its name refers to the medieval Greek concept of the Roman oikoumene, which embraced Rome and Western Europe as well as the Byzantine Empire of Constantinople (“New Rome”) and its Slavic commonwealth. The acoustics of Hagia Sophia on this album were measured and analyzed, and auralized in real time on Cappella Romana’s performance by the Icons of Sound team at Stanford University.

Mother of Orphans: St. Sophia of Thrace, Paterikon For Kids 24

A Voice For Our Time: Radio Liberty Talks, SET