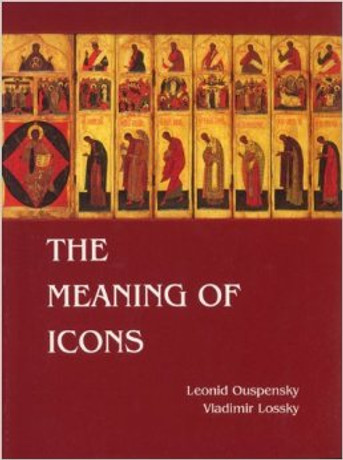 ALL BOOKS HAVE DAMAGED COVERS. BOOKS ARE NON-RETURNABLE. ALL SALES FINAL.

The introduction into the meaning and the language of the icons by Ouspensky imparts to us in an admirable way the spiritual conceptions of the Eastern Orthodox Church which are often so foreign to us, but without the knowledge of which we cannot possibly understand the world of the icon.

"It is not the purpose of the icon to touch its contemplator. Neither is it its purpose to recall one or the other human experience of natural life; it is meant to lead every human sentiment as well as reason and all other qualities of human nature on the way to illumination."

"The entire visible world as depicted in the icon is to foreshadow the coming Unity of the whole creation, of the Kingdom of the Holy Ghost."

A very interesting section of the technique of icon painting is followed by the main part of the book, in which both authors describe the most important types of icons. Apart from a detailed description of the icon screen (iconostas) of the Russian Church, 58 types are explained with the aid of an equal number of illustrations, amongst which there are alone 10 various representatives of the virgin. Special mention is due to 51 icons reproduced in their complete colorful splendor.

The section of subjects made in order to reveal the main features of Orthodox iconography was naturally limited to the examples available outside of Russia. But this not in the least diminishes the value of the book; on the contrary, it led to the reproduction of many beautiful icons which had never been published before or had been unknown to wider public. A considerable number of museums and private collectors in Europe and America spontaneously placed their collections at the disposal of the authors.