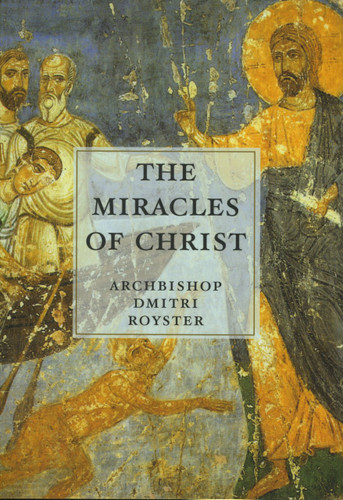 By the signs, wonders and miracles He performed, Jesus manifested His compassion for His creatures and the ultimate reason for His coming into the world, i.e., His healing and restoration of mankind. The Miracles of Christconcerns itself with this vehicle of God's self-revelation.

The miracles are studies within the framework of the church's lectionary; that is, in the order in which the people of God hear them read aloud in church as a part of the proclamation of the Word. The book is in three parts. Part one deals with the miracles recorded in St Matthew's and St Luke's Gospels, part two with the signs of the Gospel of St John (most of which are read in the Paschal season), and the third part surveys the miracles recorded in St Mark's Gospel. It is this shortest Gospel that sharply condenses the whole story of Christ and points repeatedly to His saving death, burial and resurrection.

The Church's Tradition has deemed the lessons from St Mark as the most appropriate ones for Great Lent, when the catechumens were being prepares for their baptism, and when those who were already members for the Church struggled to become once again what they were made when they were first baptized.

His Eminence Dmitri Royster, retired Archbishop of Dallas and the South of the Orthodox Church in America, and author of Six SVS Press titles, fell asleep in the Lord on 28 August 2011

The Miracles of Christ