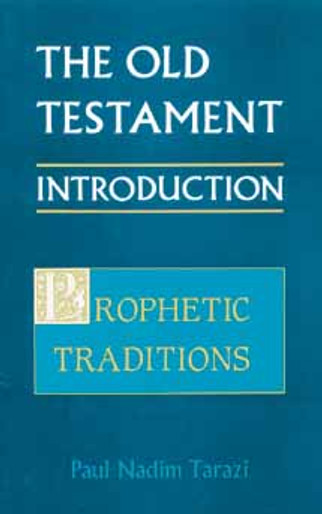 The books of the Old Testament prophets abound with enigmas tending to leave the modern reader bewildered. Why did Amos claim not to be a prophet? Did Hosea really marry a harlot at God's command? Were Isaiah's famous "sign of Immanuel" and "servant poems" really Messianic prophecies? Why all the strange visions of Ezekiel, and what do they mean? Above all, what is or was a "prophet" and what was each one trying to say to his contemporaries?

Fr Paul Tarazi's distinctive treatment of the prophetic books allows him to answer all of these and other key questions in the second volume of his trilogy of Old Testament Introductions. First examining in detail Amos as a prototype of all the prophets and then focusing solely on the unique message and characteristics of each of the others, he is able to treat important issues with a depth rarely attained in an introductory work.

The second volume parallels the first in its elucidation of the various levels of tradition present in the Old Testament books it surveys. Fr Tarazi leads his reader to an understanding of the prophet as an individual and of his message as he preached it personally to his contemporaries. He shows how each subsequent layer of tradition did not obscure that message but rendered it understandable and applicable to later generations. Fr Tarazi's explanation of the process does the same for our own generation, "illuminating the lengthy and, at times, meandering path of God's 'prophetic word' over the centuries."

This volume is the second in an introductory series on the Old Testament by Fr Tarazi and includes Volume I: Historical Traditions and Volume III: Psalms and Wisdom. All three volumes are also available in a set from SVS Press.