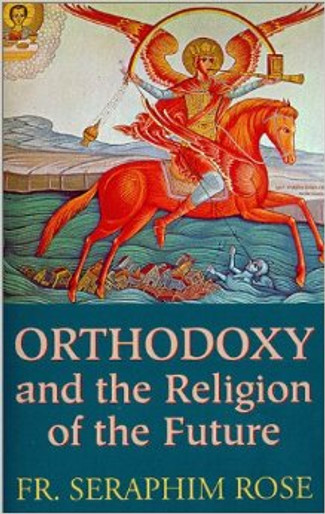 Do the Orthodox have the same God as non-Christians?

What phenomena are assaulting Christianity in our modern world?

What is the Orthodox understanding of UFOs?

How can Christians avoid being caught up in the Apostasy?

The present book examines in eight chapters these and similar questions facing Christians in the contemporary world. The religious phenomena of today are symptoms of a "new religious consciousness" that is preparing the world religion of the future. Phenomena such as Yoga, Zen, Tantra, Transcendental Meditation, Maharaj-ji, Hare Krishna, UFOs, the charismatic movement and Jonestown are presented in contrast to the Orthodox Patristic standard of spiritual life, without the understanding of which in the coming time of antichrist, it will scarcely be possible for Christians to be saved.

Written in 1975 and updated by the author in 1979, Orthodoxy and the religion of the Future has proved prophetic in the succeeding decades. A new epilogue to this fifth edition shows how the "new spirituality" has progressed precisely along the lines Fr. Seraphim described. Further developments are discussed, such as the growth of the New Age movement, the rise of witchcraft, the formation of a UFO network, the promotion of gnostic Christianity, the influence of feminist theology and the "Re-imagining" movement, the impact of the charismatic "Toronto Blessing," and the effects of globalism.

The author, Fr. Seraphim Rose (1934-1982), was an Orthodox monk in the ancient tradition who dedicated his life to reawakening modern Western man to forgotten spiritual truths. From his remote cabin in the mountains of northern California, he produced writings which have reached millions throughout the world. Today he is one of the best-loved spiritual writers in Russian and Eastern Europe. His books Orthodoxy and the Religion of the Future and The Soul After Death have changed countless lives with their uncompromising and sobering truth.

Outreach: Helping Hands for the Needy