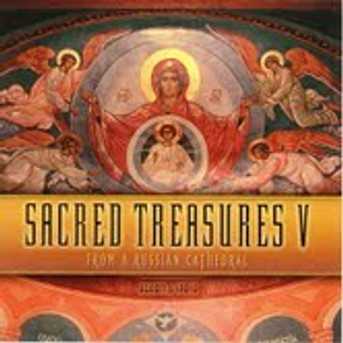 Sacred Treasures V: From A Russian Cathedral is the latest installment in the critically acclaimed Hearts of Space series of sacred choral music. Each piece from this collection is infused with a deeply devotional, solemn and lyrical quality. Product Description SACRED TREASURES V: FROM A RUSSIAN CATHEDRAL features mainly 20th century and contemporary composers. There are several selections from Liturgy of Peace by Archbishop lonafan (Yeletskyh) of Kiev in which the eastern Liturgy of St. John Chrysostom is sung to the melodies of Western Gregorian chants, creating a musical synthesis of the two traditions. Nikolai Kedrov Sr. s famous setting of The Lord s Prayer is sung by the Eva Quartet in traditional Bulgarian women s folk style. They appear again in To Thee We Sing by Dobri Christov, Bulgaria s greatest sacred music composer. The Ektenia by N. Frunza is an exquisite example of the Slavonic style in which a single angelic voice floats above a dense carpet of a cappella voices. The Sound of Spirit by American composer Georgia Kelly is not from the Orthodox tradition, yet is similar in structure and feeling to the Ektenia. Kiev s Credo Chamber Choir gives a passionate rendition of Holy God by Russia's Georgiy Sviridov. Three hymns from Rachmaninov s version of the Liturgy of St. John Chrysostom and one from Tchaikovsky s version, along with O Gentle Light, are powerful examples of singing by Russia s massive mixed choirs. Estonian Urmas Sisask s spectacular Dominus Vobiscum, though not Orthodox, reveals the influence of Orthodox chant. It is Truly Meet is one of many pieces by composers who left the USSR and continued to create abroad. Shen Khar Venakhi is a lovely 12th century Georgian hymn in honor of the Mother of God. The numerous repetitions of Amen, Alleluia and Gospodi pomilui ( Lord have mercy ) throughout the compilation create a unifying theme. All the pieces and performances are infused with a solemn and deeply devotional quality. The singing is spacious and warm, creating an atmosphere of holiness and benediction. The intention was to weave hymns and verses into a seamless tapestry in which the whole is greater than the sum of its parts, and the individual elements of the compilation become movements in a choral symphony of timeless beauty. ELLEN HOLMES, PRODUCER. In Slavonic.