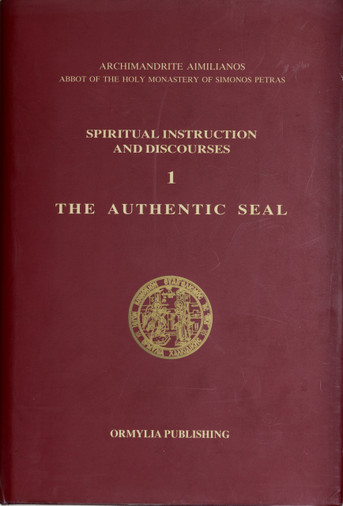 Tranquility in Christ, which is the focus of the monastic profession, loves above all else the secret, ardent quest for the face of the Lord, the Word of God, Who created everything and now chronicles the return of us, His creatures whom He endowed with reason, to our ancient beauty.
But among the everyday pastoral cares of the abbot of a monastery, there is also, apart from private and personal contacts with each of the monks, the task of delivering spiritual homilies to the general assembly of the brotherhood. This obedience is imposed by the monastic canons for the support and training of his spiritual children.
We have now, by the Grace of God, been carrying out this homiletic obedience for 35 years, at organised conference, and also by necessity or request, in books of a collective nature, Recently, then, we have found ourselves, as it were between the hammer and the anvil, under pressure from the host of our spiritual children, both monastics and lay people, to collect in one volume a part of these homilies at least, for their own spiritual benefit as well as that of those friends of monasticism who ask for words of edification and comfort from us.
Apart from this, there has recently been a rekindling and spreading of love and respect for monasticism, especially that of the Holy Mountain, with the result that many bishops who are friendly towards monasticism, as well as other Orthodox church agencies and also association of God-fearing children of the Church are now all seeking advice from an Elder.
In giving these various texts for publication to the Holy Community of nuns living in asceticism for the love of God at Ormylia (Halkidiki), whose steps, from infancy, we have guided along the way of the Lord, unworthy though we are - we pray that the homilies will be the occasion for the hope within us to be made manifest and will also be tinder to be fanned into an intimate relationship with the Word of God, before Whom we bow…    Archimandrite Aimilianos. -- Prologue

The Way of the Spirit: Reflections on Life in God

God is Wonderful in His Saints - Book of Akathists