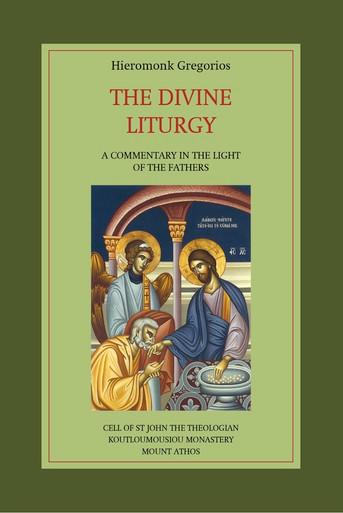 When Christ first spoke about the Mystery of the Divine Eucharist, He called Himself the "Bread of life", which came down from heaven to be offered for the life and salvation of the world. Christ is the "Bread of life" which comes down from heaven continually through the power of the Holy Spirit. It comes down at the moment of the Eucharistic annunciation into the virgin Church, and the holy Church becomes the "good earth and blessed" which brings forth the Bread of life. It is this reality of Christ's descent and His presence within the Church that we experience in the Divine Liturgy. The Divine Liturgy is Christ in our midst.
The holy Evangelists and the God-bearing Fathers spoke to us of Christ as they experienced Him when He was with them, as they experienced Him as a living reality in the Divine Liturgy: That which was from the beginning, which we have heard, which we have seen with our eyes, which we have looked upon and touched with our hands, concerning the Word of life (1 John 1:1-2_. It is from the writings and eucharistic experiences of these saints, who have seen the true Light, who have heard the Word and "touched the immaculate head of the Master", and who are eternally contemporary, that the present commentary is compiled. -From the Forward

Rather than approach the Great Mystery of the Bloodless Sacrifice as a product of historical cause and effect, Father Gregorios leads the reader into a symphony of the Holy Spirit, a product of divine inspiration and guidance, explained to the reader through the writings of Holy Scripture and the revered Fathers of the Church. For this, he stands in contradistinction to most modern commentaries which reduce liturgical practice to the exigencies of history. Such commentaries often speak of the need to reform, recover, replace, renew, and by that imply there are defects in what we have received. Father Gregorios humbly rejects such views, stating his role as author in the following way:

Some may say that a contemporary commentary on the Divine Liturgy should reflect how a contemporary Christian sees, hears and touches Christ, but on account of the present author's spiritual blindness, deafness and insensibility he has turned to those who have seen the true Light, who have heard the Word and 'touched the immaculate head of the Master,' and who are eternally contemporary." (Foreword) It is not the Holy Liturgy which must be transformed to establish relevancy for the modern man, but we whose prayer is weak and heart somewhat yet hard, who must be transformed and softened by the glorious Living Faith "to come close to Christ," for the Liturgy is "Christ with us." Therefore, our gateway to understanding the cornerstone of Orthodox worship is to recognize "the totality of the wondrous events performed by God, in order to bring man after his disobedience back to His house and make him His own once more…the reality of our salvation in Christ is what we experience at every Divine Liturgy…

The Divine Liturgy: A Commentary in the Light of the Fathers should be considered an essential resource for every Orthodox Christian, clergy and laity alike, both for devotion and instruction.

The Divine Liturgy: A Commentary in the Light of the Fathers