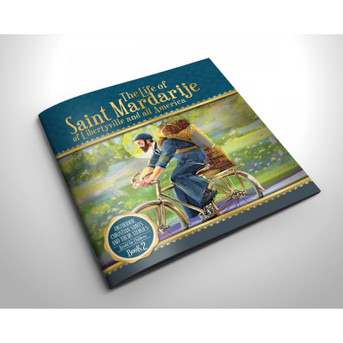 This is the book no. 2 in the series Orthodox Christian Saints and Their Stories. It brings to us an interesting story about St. Mardarije-the newly proclaimed saint in the Orthodox Christian Church. His relics were recently opened and found to be incorrupt from the knees up, with skin and hair still intact, bearing witness to the sanctity of this holy God-pleaser, already confirmed by his inclusion among the ranks of the saints.  In light of the one hundredth anniversary of the arrival to North America of Saint Mardarije of Libertyville, and his unselfish and energetic preaching of the Word of God on this continent, the Orthodox Christian publisher Orthodox Lighthouse has prepared a narrative of his life intended for the Orthodox youth of America. The book depicts the main events in his life in chronological order, with great emphasis placed on the holiness that decorated his life.  It also contains a map of the world in order for our readers to better understand where Mardarije laid his holy footsteps. A glossary is included to help understand historical, biblical, and theological expressions.  Illustrated by: Angeliki Delecha This book is available in the Serbian and English languages. Recommended for ages 12 and up.

To the Glory Of God the Father - The Lives of St. Mardarije & St. Sebastian