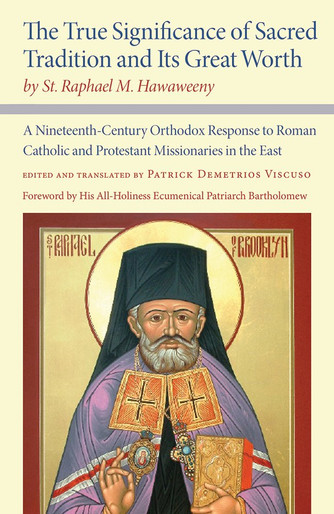 Never before published, the theological thesis of St. Raphael Hawaweeny (1860–1915) is a fascinating work that shows the intersection of Roman Catholicism, Protestantism, and Eastern Orthodoxy in the late nineteenth century. Canonized by the Orthodox Church in 2000, St. Raphael was the first Orthodox bishop consecrated in the western hemisphere. His thesis reflects the life of the Orthodox community under Ottoman rule and is an apologia for Orthodox tradition, acting as a response to arguments advanced by Roman Catholic and Protestant missionaries in the Middle East.

Patrick Viscuso’s introduction explains the complex historical and theological forces at work in St. Raphael’s world. Since the sixteenth century, the Roman Catholic Church had launched major proselytization efforts toward Orthodox Christians in the Ottoman Empire, with the support of the great Western powers. In the late nineteenth century, the United States dominated Protestant efforts in the region. The powerful language in St. Raphael’s thesis and his refutation of Roman Catholic and Protestant positions reflect an active dialogue with Western Christianity.

The thesis, dated May 1, 1886 was written as part of the requirements for graduation from the Theological School of the Great Church of Christ, an institution of the Ecumenical Patriarchate located on the island of Halki in the Sea of Marmara, near present-day Istanbul. Patrick Viscuso’s translation is based on his transcription of the handwritten Greek text. Viscuso provides this transcription, along with translations of the 1874 Regulations of the Theological School and a contemporary account of life at the school. This important volume will appeal to historians of the Ottoman Empire and Christianity, specialists interested in religious pluralism in America, and general readers interested in religion and Christian dialogue.

The Theology of Paul the Apostle

The Synaxarion: The Lives of the Saints of the Orthodox Church, Volume V: May, June

The Synaxarion: The Lives of the Saints of the Orthodox Church, Volume IV: March-April

The Vigil of Christmas: Great Compline and Matins

The Spirituality of the Christian East

The Synaxarion: The Lives of the Saints of the Orthodox Church, Volume III: January, February

The Vision of Matthew: Christ, Church, and Morality in the First Gospel