Their Proclamation: Selections from Vespers and Matins of the Feast of Sts Peter and Paul 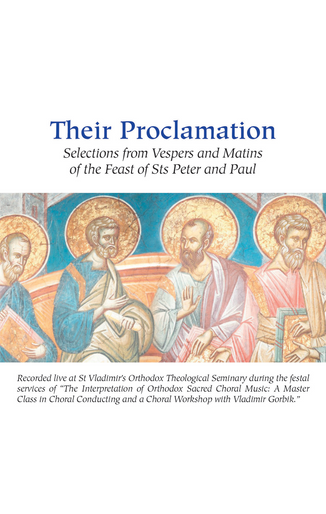 Their Proclamation: Selections from Vespers and Matins of the Feast of Sts Peter and Paul

The week-long gathering at St. Vladimir’s Orthodox Theological Seminary that took place from June 25-29, 2012 was aptly termed a “master class” on the topic of “Interpreting Orthodox Sacred Music.” The task set before the twenty-nine singers and five student conductors, was to master nearly 250 pages of music for All-Night Vigil and Divine Liturgy, bound in voluminous choral folders. The results achieved within a period of three-and-a-half days of intense and demanding rehearsals would be termed by many participants, a “mountain-top” experience.

A news article by Deborah Belonick summarized the experience in the following terms: “Their efforts—which might be described as including a mixture of blood, sweat, tears, and tremendous grace—were notable. By the end of the week, workshop participants composed a heavenly chorus; they presented a public recital in the Metropolitan Philip Auditorium (which brought listeners to tears) and sang the responses at the Vigil and Primatial Divine Liturgy on the Feast of Sts Peter and Paul in the seminary’s Three Hierarchs Chapel.”(from a release on svots.edu).

The fruits of these labors are documented in this recording, comprised of highlights from the All-Night Vigil on the eve of the feast of Sts Peter and Paul (sung on June 28). The examples of Orthodox liturgical music featured here employ a variety of textures and exhibit many levels of complexity, exemplifying many of the different styles of choral music and chant found in the Church today. Espe-cially valuable is the fact that these selections are sung live in the context of the actual worship service; one can easily hear the serving clergy, the movement of children, the impromptu participation by the congregation, and how the Master Class Chorus remains focused on prayer in the midst of these surroundings, thus fulfilling their role as a liturgical choir. It is hoped that this recording will be the first of many under Vladimir Gorbik’s direction, demonstrating how to interpret the vast choral repertoire of the Orthodox Church in a manner that is musically polished, emotionally engaged, and, at the same time, liturgically appropriate.

Vladimir Gorbik (b. 1970) is one of the most accomplished choral conductors in Russia today, specializing in the realm of Russian Orthodox sacred music. Since 1998 he has served as Artistic Director and Conductor of the professional Men’s Chorus at the Moscow Representation Church (Metochion) of the Holy Trinity-St. Sergius Monastery. With this choir he has made over a dozen outstanding recordings of both liturgical services and concert programs. The choir regularly sings at Patriarchal services in the Dormition Cathedral in the Moscow Kremlin, and accompanied Patriarch Alexy II on his trip to the Holy Land. The repertoire of the Metochion’s Men’s Chorus cultivates the finest repertoire and interpretive traditions of the Moscow School and the Holy Trinity-St. Sergius Lavra. In September of 2012, Professor Gorbik was appointed to the Conducting Faculty of the Moscow State Conservatory, his graduate alma mater.

Every Day Will I Bless Thee

Vigil: Selections from the All-Night Vigil of the Orthodox Church [CD]

Hymns of Holy Russia in the New World