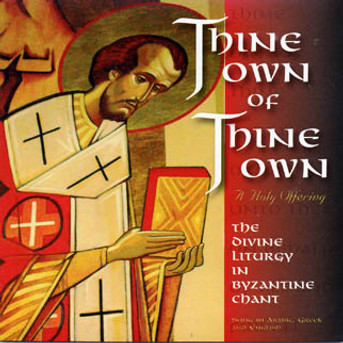 The Church's Liturgy is so important, St. John of Kronstadt even said that, "If one was to put all of the world's most precious things on one side of a scale, and the Divine Liturgy on the other, the scales would tip completely in favor of the Divine Liturgy." He revealed the depth of this statement by explaining that "the Divine Liturgy is truly a heavenly service upon earth, during which God Himself, in a particular, immediate, and most close manner, is present and dwells with men, being Himself the invisible Celebrant of the service, offering and being offered. There is nothing upon earth holier, higher, grander, more solemn, more life-giving than the Liturgy....When the Lord descended upon Mount Sinai in the Old Testament, the Hebrew people were ordered to previously prepare and cleanse themselves. In the Divine Liturgy we have not a lesser event than Godâ's descent upon Mount Sinai, but a greater one: here before us is the very face of God the Lawgiver." Sung in Arabic, Greek, and English by V. Rev. Elias Bitar, Samer Kannab-Adida, George Mansour, and Rana Nassour-Derbaly

With An Open Heart: Sounds of Worship at St. Anthony's Orthodox