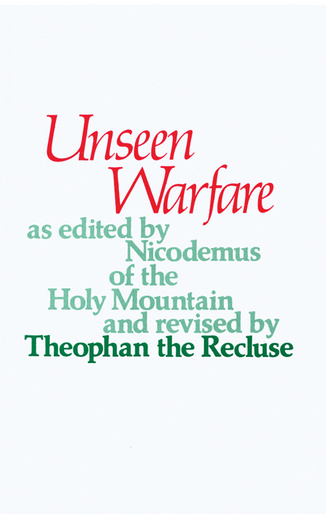 This spiritual classic was written by Lorenzo Scupoli, a sixteenth-century Venetian priest. Immensely popular in its own day, it was ranked by Francis de Sales with the Imitation of Christ. In the general rapport between Western and Eastern Christendom, it reached Nicodemus of the Holy Mountain, who first recognized its immense spiritual worth, and later, in the nineteenth century, by Theophan the Recluse, both of whom edited and translated the work.

Rich in its references to the teachings of the saints and Fathers, Unseen Warfare combines the insights of West and East on that spiritual combat which is the road to perfection and the stripping away of all that militates against it. Staretz Theophan wrote in his foreword, "the arena, the field of battle, the site where the fight actually takes place is our own heart and all our inner man. The time of battle is our whole life."

Unseen Warfare is a perfect complement to the Philokalia.

Victory in the Unseen Warfare

Prayer in the Unseen Warfare

Virtue in the Unseen Warfare