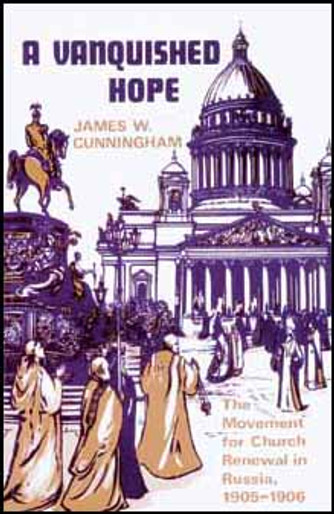 A common assumption made by many historians of pre-Bolshevik Russia is that the Russian Orthodox Church was a moribund relic of the cultural past, content to serve as a quaint but sometimes oppressive instrument of the tsarist state. A Vanquished Hopeeffectively refutes this view. As the book demonstrates, ecclesiastical documents, bishops' reports and theological journals reveal a widespread movement to revitalize the church in its structures and life, a movement concerned above all with the church's emancipation from state control.

Ecclesiastical intelligentsia - priests, prelates and professors - were nearly unanimous in their belief that restoration of the church's autonomy was essential if the inner vitality of the Church was to be effective in the social, economic and political transformations of the twentieth century. Their concerns and activities, culminating in the preparations for a national church council, are set forward with a wealth of detail in this fascinating study.

Other books on the Russian Church from St Vladimir's Seminary Press include: The Russians and Their Church by Nicolas Zernov, Ultimate Questions: An Anthology of Modern Religious Thought by Alexander Schmemann, and The Religion of the Russian People by Pierre Pascal. All three words provide further insights into the issues discussed in A Vanquished Hope.

Celtic Christianity: A Sacred Tradition, a Vision of Hope

Harbor for Our Hope - On Acquiring Pease Amidst Suffering