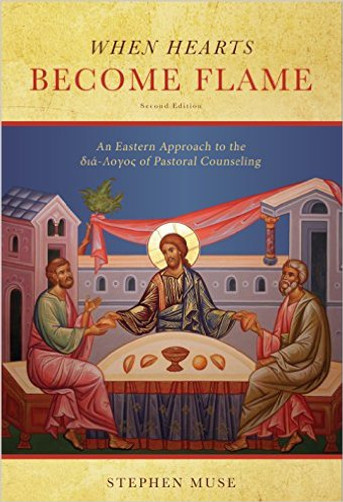 Whatever else he or she does, the pastoral counselor, same as the priest at the Divine Altar, enters into call and response relationship invoking God's presence and seeking to be receptive to God's activity unfolding in the here and now with the intention of offering Christ to the other (and receiving Him) while serving at the altar of the human heart. When Hearts Become Flame reflects on the question, "What Makes Counseling Pastoral?" in light of the integration of all three aspects of our human nature in dialogue with others in such a way that as in Emmaus, Christ, the Logos, appears in 'between' bringing healing and transformation. It is not enough to be emotionally warm, theoretically correct and methodologically skillful. Pastoral care and counseling involve an integrated mindful presence existentially engaged in dialogue with the other with the same vulnerability and alertness that one brings to God in prayer. Inner discernment and ascetical struggle along with existential engagement with and for others in working for a just and humane world are equally important in response to God's love given for all.

"When Hearts Become Flame takes its point of departure and return from reflection on the question, "What Makes Counseling Pastoral?" to show that it involves participation of all three aspects of our human nature in dialogue with others in such a way that as in Emmaus, Christ, the Logos, appears 'between' us. It is not enough to be emotionally warm or conceptually accurate or physically energetic. The human person is an integrated presence of all three turned toward trialogue with God, self and others. Taking my cues from Jesus' formulation of the heart of the law, it is clear that an Orthodox approach to pastoral care and counseling cannot be focused solely on the intrapsychic and individual person. Nor can social justice proceed cut off from the wellspring of contemplative life in Christ, as Thomas Merton observed, without burning out or becoming the evil that we fight against. There is both a private inner discernment and ascetical struggle in dialogue with God and an existential and communal outward dimension which involves fellowship in confronting justice issues in society that contribute to the sickness and wellbeing of people. These two domains must be considered together as mutually influencing one another in a circular causality. Given the burgeoning field of counseling and psychotherapy and the growing interest in its spiritual dimensions, the time is ripe for interdisciplinary Orthodox dialogue between priests and practitioners, monastics, theologians and scientists as well as with mental health professionals outside Orthodoxy. The fi eld of pastoral counseling has been largely Protestants and Roman Catholics, who, since the founding of AAPC, have contributed half a century's worth of valuable reflections on the integration of theology and psychology in service to suff ering persons. There is a great deal we can share with one another to know Christ more fully and learn how to serve better and celebrate human potential when it is in co-creative partnership with God to help alleviate human suffering.

Dr. Muse shares insight and wisdom gained over the course of his life's journey as a pastor and psychotherapist trying to follow the Light wherever He leads. Some profound and very useful insights are found within these pages."

Ways of the Lord