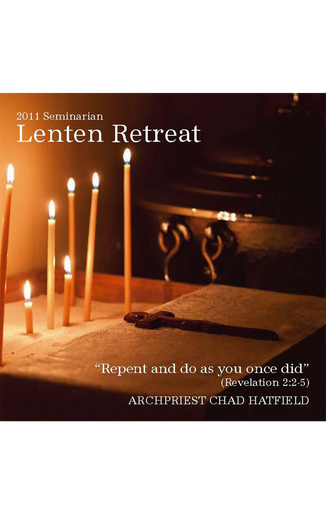 Father Chad’s meditations, titled “Conversion of the Heart,” “Life in the Kingdom,” “Extending the Kingdom,” and “Eucharistic Living,” were delivered to the St Vladimir’s Seminary community over the course of the two-day lenten retreat. “Very few Orthodox Christians have the blessing that we have: to retreat from the demands of life during these two days,” began Fr. Chad. “In the words of St. Paul, this is a time to remember that we are ‘dead to sin and alive in Christ Jesus.’ It is a time especially to remember that it is too easy in a hallowed place, like the seminary, to become merely ‘paid professional holy men and women.’ It is a time, instead to return to our First Love, to begin again to love God with our whole heart, mind, and soul. All we need to do so is the desire and the decisiveness to change.”

Archpriest Chad Hatfield is the Chancellor and CEO of St Vladimir’s Orthodox Seminary in Yonkers, New York, assuming the position in 2007 after serving previously as the Dean of St Herman Orthodox Seminary, Kodiak Island, Alaska, and in over 30 years of ordained ministries including schools, parishes, and the missionary field in Africa.