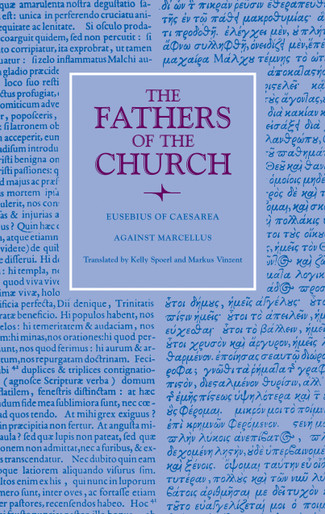 This is the first English translation of the last two theological works of Eusebius of Caesarea, Against Marcellus and On Ecclesiastical Theology. The first text was composed after the deposition of Marcellus of Ancyra in 336 to justify the action of the council fathers in ordering the deposition on the grounds of heresy, contending that Marcellus was "Sabellian" (or modalist) on the Trinity and a follower of Paul of Samosata (hence adoptionist) in Christology. Relying heavily upon extensive quotations from a treatise Marcellus wrote against Asterius the Sophist, this text provides important information about ecclesiastical politics in the period before and just after the Council of Nicea, and endeavors to demonstrate Marcellus's erroneous interpretation of several key biblical passages that had been under discussion since before the council. In doing so, Eusebius criticizes Marcellus's inadequate account of the distinction between the persons of the Trinity, eschatology, and the Church's teaching about the divine and human identities of Christ.

On Ecclesiastical Theology, composed circa 338/339 just before Eusebius's death, and perhaps in response to the amnesty for deposed bishops enacted by Constantius after the death of Constantine in 377 and the possibility of Marcellus's return to his see, continues to lay out the criticisms initially put forward in Against Marcellus, again utilizing quotations from Marcellus's book against Asterius. However, we see in this text a much more systematic explanation of Eusebius's objections to the various elements of Marcellus's theology and what he sees as the proper orthodox articulation of those elements.

Long overlooked for statements at odds with later orthodoxy, even written off as heretical because allegedly "semi-Arian," recent scholarship has demonstrated the tremendous influence these texts had on the Greek theological tradition in the fourth century, especially on the orthodox understanding of the Trinity. In addition to their influence, they are some of the few complete texts that we have from Greek theologians in the immediate period following the Council of Nicea in 325, thus filling a gap in the materials available for research and teaching in this critical phase of theological development.

Abraham's Silence: The Binding of Isaac, the Suffering of Job, and How to Talk Back to God

A Voice For Our Time: Radio Liberty Talks, SET

Money & Salvation: An Invitation to the Good Way