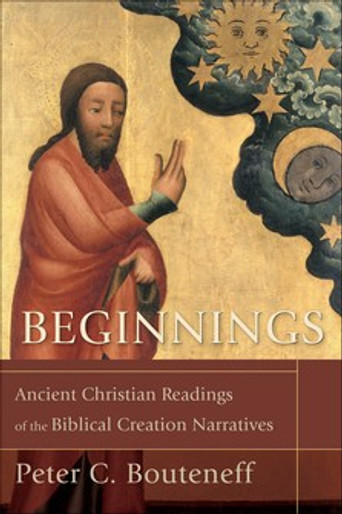 Recently renewed debates concerning creation and evolution make contemporary Christians wonder how their forebears in the faith understood the Genesis creation narratives. Were the stories of the six days and of the garden read historically, or did they have some other function? This volume from Peter Bouteneff brings needed attention to early Christian understandings of those key biblical texts. After introductory chapters on the narratives and their reception in early Judaism and in the New Testament (especially in Paul's letters), Bouteneff focuses on the church fathers. He considers how the narratives of Genesis 1-3 were read as foundational, authoritative texts during the formative centuries when the Greek fathers were laying the framework of Christian theology. Chapters are devoted to writers of the second century (the apologists, from Justin to Irenaeus), the third century (mainly Origen but also the Latin writer Tertullian), and the fourth century (Cyril of Jerusalem, Athanasius, and especially the three Cappadocian fathers). Bouteneff finds that from Paul onward, the primary interest in Adam was as a prefiguration of Christ. The six days of creation bespeak God's ordered creation of the world through Christ, and early Christian readings of Genesis reflect Christ-centered understandings of providence and time.

Bouteneff's engaging and informative study makes the Greek fathers' thought accessible to biblical interpreters and theologians as well as pastors, students, and all who are interested in the early church and its use of the Bible.

"This wonderfully researched and elegantly written book provides the reader with a compelling and trustworthy portrait of how the fathers of the church read the story of Adam and Eve. As Bouteneff tells that story we see that the tale of the fall is always contextualized within a narrative that celebrates the restoration and redemption of the human race."--Gary Anderson, professor of Old Testament, University of Notre Dame

"Beginnings takes us back to the beginning of the scriptural creation narrative and to the beginning of the Christian appropriation of this narrative. The reader is initiated into precursors of the Christian tradition (especially the Septuagint and Philo) and then guided through the early Christian thinkers (especially Origen) whose writings underpin current theological reflection on Genesis 1-3. Beginnings allows twenty-first-century readers to wrestle with issues ranging from creation and the image of God to anthropology and gender--all in the context of the community of faith that found its beginning, middle, and end in Jesus Christ. Peter Bouteneff has done the church a valuable service in this focused study by highlighting not only the diversity of interpretation that characterized the church's interpretation but also the remarkable unity in the different communities' approaches to this sacred text of Genesis."--Joel C. Elowsky, managing editor, Ancient Christian Commentary on Scripture, Drew University

"Peter Bouteneff's Beginnings meets a precise need in patristic studies and in the history of early Christian biblical interpretation: the need for a historically astute, theologically sympathetic, and hermeneutically sophisticated analysis of the fathers' reading of Genesis 1-3. Here at last is a work that truly sets in relief the many layers of meaning that patristic commentators saw in these rich and evocative opening chapters of the Bible. Rather than dismissing their work as premodern, prescientific groping for a valid explanation of the stories of creation and fall, Bouteneff definitively demonstrates the profound theological contextualization at work in early Christian exegesis of the Genesis cosmogony, from the New Testament writers through the Cappadocian fathers of the fourth century. This is a superb monograph."--Paul Blowers, Dean E. Walker Professor of Church History, Emmanuel School of Religion

"I hope this remarkable study will be widely read and appreciated. From the start, the reader is obliged to grapple with questions about how a text is to be read when it can be demonstrated that layers of subsequent interpretation have had as much, if not more, influence than the text itself. And what more crucial text is there than Genesis 1-3, which has shaped Christian understanding of both creation and fall in ways that are now controversial, both within the churches and in the public domain? Though not always agreeing with the analyses presented here, I can guarantee that hardly anyone, whatever their starting point, will come away from this book without having found some new insight."--Frances M. Young, Edward Cadbury Professor of Theology, retired, University of Birmingham

"The question of the origin of humankind and the cosmos has perhaps never been so hotly debated as nowadays, with 'evolution' and 'creationism' presenting themselves as polar opposites. In this fine book, Peter Bouteneff presents a carefully researched and scholarly reading of early Christian readings of the creation account in Genesis. What emerges is a range of interlocking insights into God's creative purpose and the human place in the cosmos. Genesis 1-3 is seen as neither a myth nor an outdated scientific account, but a poem of creation, yielding deeper meanings upon closer ponderings. Bouteneff unveils the often surprising riches of our patristic inheritance with a rare intelligence and passion."--Andrew Louth, professor of patristic and Byzantine studies, University of