Christianity in India, From Beginnings to the Present 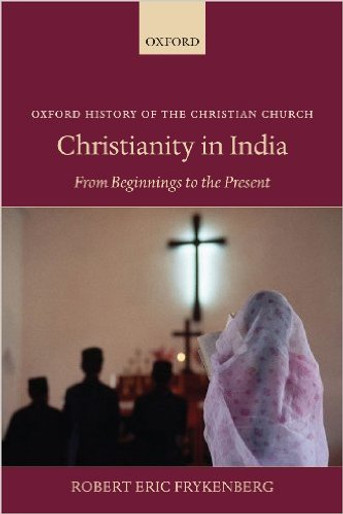 Christianity in India, From Beginnings to the Present

Robert Frykenberg's insightful study explores and enhances historical understandings of Christian communities, cultures, and institutions within the Indian world from their beginnings down to the present. As one out of several manifestations of a newly emerging World Christianity, in which Christians of a Post-Christian West are a minority, it has focused upon those trans-cultural interactions within Hindu and Muslim environments which have made Christians in this part of the world distinctive. It seeks to uncover various complexities in the proliferation of Christianity in its many forms and to examine processes by which Christian elements intermingled with indigenous cultures and which resulted in multiple identities, and also left imprints upon various cultures of India.

Thomas Christians believe that the Apostle Thomas came to India in 52 A.D./C.E., and that he left seven congregations to carry on the Mission of bringing the Gospel to India. In our day the impulse of this Mission is more alive than ever. Catholics, in three hierarchies, have become most numerous; and various Evangelicals/Protestant communities constitute the third great tradition. With the rise of Pentecostalism, a fourth great wave of Christian expansion in India has occurred. Starting with movements that began a century ago, there are now ten to fifteen times more missionaries than ever before, virtually all of them Indian. Needless to say, Christianity in India is profoundly Indian and Frykenberg provides a fascinating guide to its unique history and practice.

Modern Orthodox Thinkers: From the Philokalia to the Present

Christ is Born - Give Glory! Hymns, Chants, and Carols (CD)