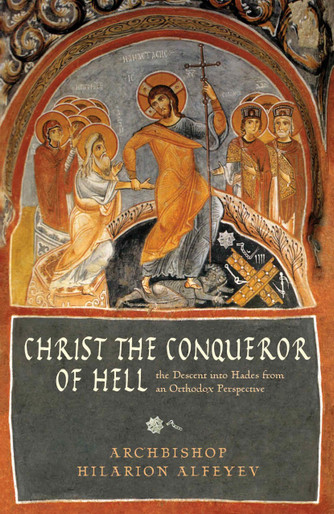 The Descent into Hades from an Orthodox Perspective

This in-depth study on the realm of death presents a message of hope held by the first generation of Christians and the early church. Using Scripture, patristic tradition, early Christian poetry, and liturgical texts, Archbishop Hilarion explores the mysterious and enigmatic event of Christ's descent into Hades and its consequences for the human race. Insisting that Christ entered Sheol as Conqueror and not as victim, the author depicts the Lord's descent as an event of cosmic significance opening the path to universal salvation. He also reveals Hades as a place of divine presence, a place where the spiritual fate of a person may still change. Reminding readers that self-will remains the only hindrance to life in Christ, he presents the gospel message anew, even in the shadow of death.

Metropolitan Hilarion (Alfeyev), Chairman of the Moscow Patriarchate Department for External Church Relations, is well known throughout the Orthodox Church as a leading theologian, writer, and musical composer. He holds a doctorate in Philosophy from Oxford University and a doctorate in theology from St Sergius Orthodox Theological Institute in Paris.

Excerpt
Developing this theme, Romanos goes on to say that in order to find "the creation which has gone astray" the Son of God came down to earth, became incarnate, ascended to the cross, "as a lamp in a lampstand, and from there saw ancient Adam, sitting in darkness and gloom." After his death Christ descends into Hades. His divinity remains united with his humanity; his light illumines and fills up the nether world. Hades tries to keep the body of Christ in its hold but Christ, "as though arising from sleep, enchains Hades violently and puts him down." Addressing himself to those in Hades, Christ says:

'Rise up, all, and trample down Hades! Adam, come to me with Eve now. Do not be afraid, liable for past debts, I have paid them all, I, the Life and Resurrection.'

Christ is Born - Give Glory! Hymns, Chants, and Carols (CD)

Christ is in Our Midst