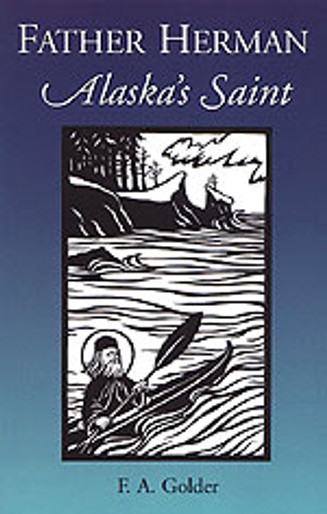 This is a revised reprint of the first English-language biography of St. Herman of Alaska, written by F. A. Golder in the 1920s and first printed in very limited quantities for distribution to friends. Based on the prima vita of St. Herman compiled by Valaam Monastery in Russia in the 19th century. Illustrated with eight original papercuts depicting scenes from St. Herman's life.

In 1794 a group of Russian missionaries from Valaam Monastery arrived in Kodiak, Alaska. For the next forty years one member of their party would remain, enduring hunger, cold, and mockery. Today he is universally recognized as a Saint of the Orthodox Church: St. Herman of Alaska. St. Herman's love for the Kodiak natives manifested itself in his service to them throughout his life. HE was a protector of the persecuted, a nurse to the sick, and a father to orphans. As a hermit on Spruce Island, he was a friend of God and of angels. Even today the natives of Alaska refer to him as their father, a connection that has never been broken.

In 1914, F. A. Golder, a leading scholar on the American Northwest at the turn of the century, spent two weeks at Valaam Monastery located on Lake Ladoga (between present-day Russia and Finland). Golder went to Valaam to learn of this missionary monk who was sent to America to bring the Orthodox Faith to the natives of the land.

The present volume contains Golder's Life of St. Herman and a collection of the Saint's miracles, spanning from the time of his repose to our own times. Included is a contemporary pilgrim's description of Spruce Island, the site of St. Herman's labors, miracles, and repose.

Our Father Among the Saints Raphael Bishop of Brooklyn