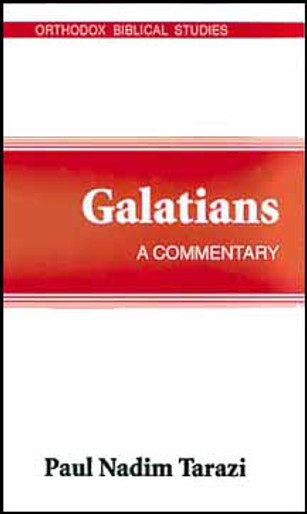 Paul's letter to the Galatians has been at the center of doctrinal controversies from the day it was written, and this is reflected in a surfeit of commentaries on the epistle. What sets this new one by Tarazi apart from the crowd is its focus on the first-century controversy addressed by the epistle rather than on the modern controversies that have swirled around it ever since Luther made his interpretation of it the center of the Protestant Reformation.

As a result, this commentary defies classification in terms of which church's perspective it adopts. It may be considered Eastern Orthodox only in the sense that it was written by an Orthodox scholar, not in the sense that it was written to support a predetermined "Orthodox viewpoint." In his expositions of the text, the author explains carefully what the Apostle Paul meant and the historical circumstances prompting him to write what he did, and presents evidence intended to allow readers to judge for themselves as to the validity of the author's conclusions.

Many of those conclusions are quite different from what one will find in the mass of other commentaries available, whether they be on any number of lesser issues or more important ones such as the relationship between "faith" and "works" (2:16); whether Paul's scriptural interpretation was artificial and forced (3:16); whether 3:28 implies the difference between Jew and Greek; and whether Paul used allegory or typology to interpret scripture (4:22-31).

Anyone interested in theology, church history, or New Testament exegesis will find this commentary an incomparable study resource, one that opens up perspectives that cannot be found in other such resources.

About the Author:  The Rev Dr Paul Nadim Tarazi is Professor of Old Testament at St Vladimir's Orthodox Theological Seminary.