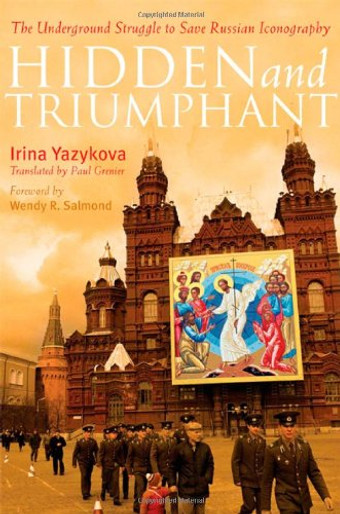 During the darkest years of the SOviet Union, iconographers kept alive one of Russia's brightest lights- the icon.

The 1920s-30s were a time of mass arrests and executions. With churches demolished and defiled and monasteries disbanded, there was every reason to fear for the continued existence of the Church itself. Revisionist propaganda was decimating the clergy, and the authorities were waging a campaign of anti-religious sentiment in every corner of the country. Not the best time, one would think, to be painting icons.

"A blinding flash of theological illumination has come out of Russia. The subject is the history of icon painting in Russia. How did this ancient tradition, at the center of Russian spirituality, survive seventy years of persecution in the 20th century? It almost didn't, but the renewal of the tradition in the last twenty years is a remarkable story, beautifully told by Irina Yazykova. The introduction contains the best theology of the icon I have ever read." -Canon Michael Bordeaux, founder, Oxford Keston Institute, UK

Irina Yazykova is a scholar of art history and the theology of the icon. Her articles have been translated into many languages. She lives in Moscow and lectures at St. Andrew's Biblical Theological Institute and Kolomna Orthodox Theological Seminary.

Paul Grenier is a writer, translator, and interpreter. His recent translations include Fr. Dimitry Grigorieff's From Old Valaa to the New World: The Russian Orthodox Mission in North America.

Dr. Wendy R. Salmond is a scholar of Russian and early SOviet art and Professor of Art History at Chapman University in California.

The Art of Seeing - Paradox and Perception in Orthodox Iconography

Help! I'm Bored in Church - Entering Fully into Worship in the Divine Liturgy

How to Live a Holy Life