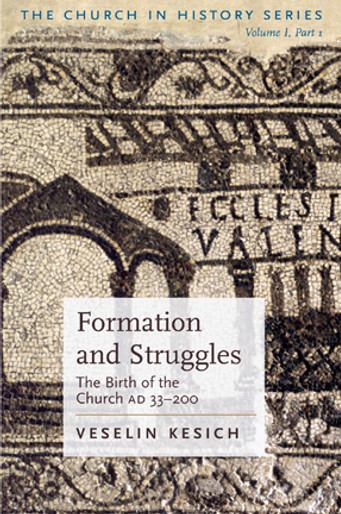 THE CHURCH IN HISTORY SERIES, VOLUME I, PART 1
Formation and Struggles
The Church AD 33--450

This study of the formation of the Church begins with the earliest Christian community in Jerusalem, led by Jesus' disciples, and ends with the expansion of Christianity into various regions of the Roman Empire. Tracing the growing pains of the Church from its birth through its separation from Judaism to its struggle against Gnostic and pagan influences, the author demonstrates how early Christians deepened their loyalty to the apostolic tradition by wrestling with internal and external challenges.

The author appeals to the general reader as well as the scholar by answering perennially popular questions: Did Jesus marry? Who was responsible for the crucifixion? What is the relationship between philosophy and theology? How were the Scriptures compiled?

The volume concludes with teachings of the church father Irenaeus of Lyons, who presents an image of a Church shaped by ministry, canon, creed, and openness to the world -- a Church that, by method and model, offers a solid base for growth in the following centuries.

About the Author: Dr Veselin Kesich, former professor of New Testament emeritus, St Vladimir's Orthodox Theological Seminary, has also authored The First Day of the New Creation, The Gospel Image of Christ, and The Passion of Christ (SVS Press).

THE CHURCH IN HISTORY SERIES of St Vladimir's Seminary Press balances the approaches of the abundance of church histories written from a Western Christian point of view. Series authors--in the unique position of being Orthodox scholars conversant with Western scholarship--have taken on the task of analyzing complicated primary sources and thoroughly critiquing modern scholarly literature to guide readers through the maze of centuries of church formation and life.