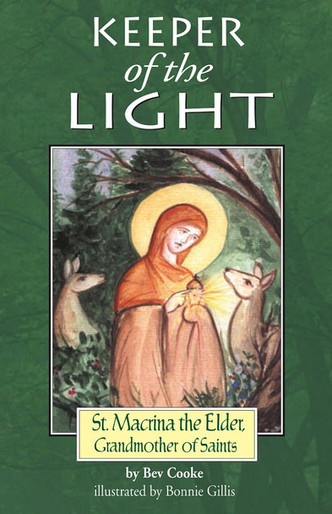 The road to sainthood takes a lifetime to travel. . . . Late in the fourth century, Christians are labeled enemies of the Roman Empire--hounded, arrested, tortured, and executed. Macrina and her husband Basil, once-wealthy Christians, flee with their small son to the mountainous forests south of the Black Sea. There, Macrina embarks on a seven-year journey of unexpected tests and trials that will take her through a harsh and hungry wilderness pilgrimage, only to plunge her into poverty and danger on the streets of Neocaesarea. So begins Macrina's adventure in faith, as she undertakes the process of becoming one of the most influential women in sacred history, the mother and grandmother of saints. Readers of all ages will be fascinated by the story of St. Macrina the Elder, who had a profound influence on her grandchildren, St. Basil the Great, St. Gregory of Nyssa, and St. Macrina the Younger. She is truly a great confessor of the Orthodox Christian faith. A chapter book with black-and-white illustrations.

About the Author: Bev. Cooke has been writing for publication since 1989. Her first love is writing for young adults, and she has three YA books on the market: Keeper of the Light, a historical novel about St. Macrina the Elder, and Royal Monastic, a biography of Mother Alexander (Princess Ileana of Romania), both published by Ancient Faith Publishing. Feral, an edgy mainstream novel, was released by Orca Book Publishers. Additionally, she has two published Akathists – Akathist to the Theotokos, Healer of Hardened Hearts and Akathist to St. Mary of Egypt.

Bev. and her husband live in Victoria, BC​, Canada​, where they enjoy two seasons: wet and road construction. They have two adult children, are enslaved by the amazing follow-you-around-like-he's-a-puppy-dog Sam the cat​,​ and attend All Saints of Alaska OCA parish.

Pictures of God: A ChildÕs Guide to Understanding Icons

Monk Who Grew Prayer, The