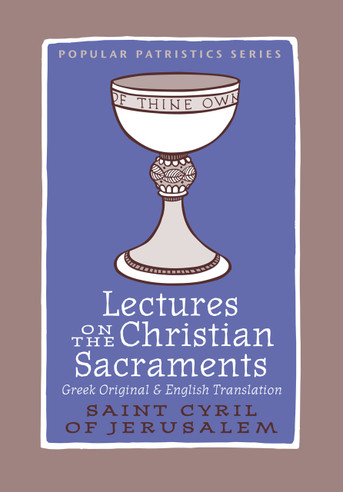 These six lectures on the Christian sacraments were delivered in Jerusalem in the fourth century. This was a time of rapid transition for the Church. Until AD 313, Christianity had been an illegal & persecuted religion, but under Constantine & his successors it became the favored religion of the state. Potential converts thronged the shining new basilicas, built through the beneficence of the emperors. Catechetical instruction was needed. And it was provided by gifted preachers & teachers like St Cyril of Jerusalem.

The first of these lectures, the Procatechesis, is a hearty welcome to the candidates for baptism and introduces them to the periods of doctrinal instruction that lie ahead. The remaining five, the Mystagogical Catecheses, are an exposition of the rites of Christian initiation—baptism, chrismation, & the Eucharist—for the newly baptized. A rich source on the history and worship of the fourth century, these lectures remain instructive & inspirational. This volume—featuring the Greek text and a new English translation by Maxwell E. Johnson, a prominent scholar of the early liturgy—will become the standard text for years to come.