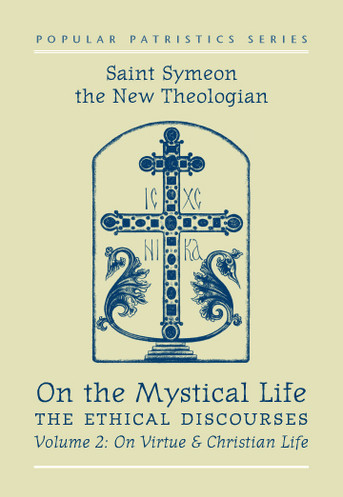 St Symeon the New Theologian was abbot of the monastery of St Mamas in Constantinople at the turn of the eleventh century. He was also perhaps the most remarkable and certainly the most forceful advocate of the mystical experience of God in the history of the Byzantine Church. Though his writings were on occasion suppressed by ecclesiastical authorities wary of his fierce enthusiasm, as well as his claims to charismatic authority, St Symeon's works survived in the Orthodox Church and continued to play a vital role in the several renewals of spiritual life and prayer which has sustained the Church in its often difficult history over the past millennium.

This is the second of a three-volume series translating The Ethical Discourses into English for the first time. Where Volume I presented St Symeon's treatments of the Church, the sacraments, and the "Day of the Lord," in this collection he addresses the traditional language of Eastern Christian asceticism in the light of his message. Apatheia, or "dispassion," the ancient term for freedom from sinful passion, is insisted on by Symeon as denoting the real possibility of a transfigured life. Elsewhere, he takes up the role of the tools of asceticism, i.e., fasting, vigils, poverty, etc., in order to underline their function as instruments enabling conformity to the Cross of Christ. Other discourses dwell on the character and signs of the saint, on faith and love, and on ascetic retreat. Throughout, St Symeon anticipates the great fourteenth-century movement of Byzantine hesychasm, as well as the monastic renaissance of eighteenth-century Mt. Athos and nineteenth-century Russia. Volume III provides a translation of his Letter on Confession together with an extensive introduction to his life and thought. All three volumes are also available as a set for a discounted price.

About the Author:  Fr Alexander Golitzin is Associate Professor of Theology at Marquette University. He is author of Et introibo ad altare Dei: The Mystagogy of Dionysius Areopagita.