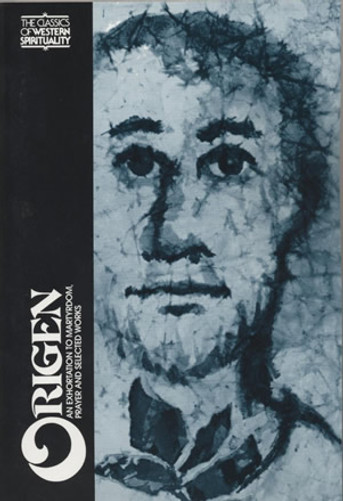 THE CLASSICS OF WESTERN SPIRITUALITY

ORIGEN- An Exhortation to Martyrdom, Prayer, First Principles: Book IV, Prologue to the Commentary on the Song of Songs, Homily XXVII on Numbers

translation and introduction by Rowan A. Greer

"Indeed, the soul is led by a heavenly love and desire when once the beauty and glory of the Word of God has been perceived; he falls in love with His splendor and by this receives from Him some dart and wound of love." -Origen (c.185-254)

Origen was born in Alexandria close to the end of the second century. His life spanned the turbulent years during the collapse of the Roman Empire. He sought to rescue and transform what was best of the Roman world and to translate the Christian spiritual quest into a language intelligible to the thoughtful and educated nonbeliever of his day.

Origen is one of the first and most important of the Christian mystics, and many of the great themes of spiritual literature can be traced back to him.

Von Balthasar, the eminent Swiss theologian, in his preface says of him, "As towering a figure as Augustine and Aquinas... his work is aglow with the fire of a Christian creativity which even in the greatest of his successors burned merely with a borrowed flame."

The collected works in this volume represent the heart of Origen's spiritual vision.