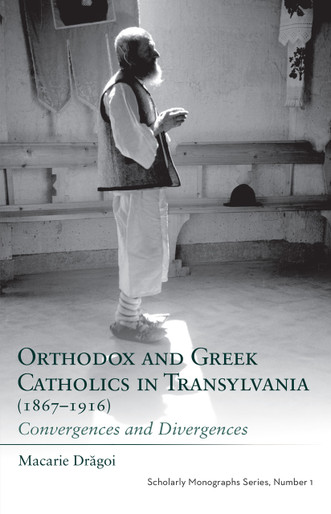 This work attempts to capitalize on, as much as possible, the fundamental research methods and priorities of contemporary ecclesiastical history: documentary and interpretive. By opting not to treat the history of these two Romanian communities separately, but rather through the lens of their encounters—whether peaceful or contentious—this work intends to emphasize, as stated in the title, the “convergences” and the “divergences” in the ecclesiastical history of the Transylvanian Romanians between 1867 and 1916. This research aims to bring forth new contributions of a documentary kind by incorporating a wealth of archival information—heretofore unknown in ecclesiastical historiography—extracted from the documentary collections preserved by the National Archives in Transylvania, as well as in church archives, especially those in the Sibiu Archive of the Romanian Orthodox metropolitan see of Transylvania.

About the Author:  Macarie Drăgoi is the Romanian Orthodox Bishop of Northern Europe, based in Stockholm. He was born in 1977 in the northern Transylvanian locality of Caianu-Mic in Romania. Theologian, historian, and ethnologist, he graduated from Saint Dosoftei of Moldavia Theological Seminary in Suceava (1991–1996), followed by the theological faculty of Babeș-Bolyai University in Cluj-Napoca (1996–2001). After further research at the Universities of Leeds and Durham (2004–2005), he received his Ph.D. in European History and the history of the Romanian Orthodox Church from Babaș-Bolyaiin Cluj-Napoca.