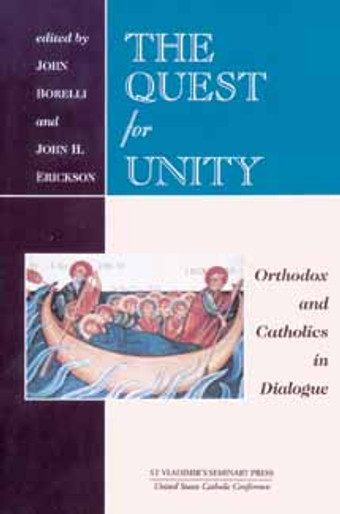 Since 1965 Catholics and Orthodox in North America have been engaged in official theological dialogue. Since 1980 such dialogue has also proceeded at the highest international level. What has been accomplished during these decades of dialogue? What issues have been addressed? What obstacles to full communion remain?

In addition to gathering together the agreed statements of these dialogues and placing them in historical context, this work analyzes the major themes which have emerged: the centrality of the Eucharist as sign of full communion, the nature of the Church's unity, the place of the sacrament of orders in the life of the Church, primacy and conciliarity and their implications for relations among churches, and--of special interest in the North American context--the issue of mixed marriage. This unique work, itself a remarkable example of Catholic-Orthodox collaboration, presents the history and current state of dialogue between the churches in an even-handed and dispassionate way. While serving as an invaluable resource for the specialist, it is also addressed to a wider audience--pastors, students, study groups, and all who are concerned about issues of Christian unity today.

A Dialogue with Joshua