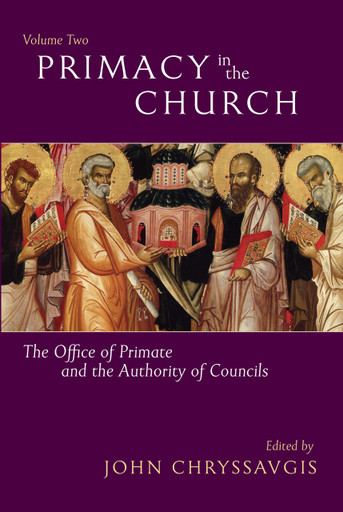 PRIMACY IN THE CHURCH is a careful and critical selection of historical and theological essays, canonical and liturgical articles, as well as contemporary and contextual reflections on what is arguably the most significant and sensitive issue in both inter-Orthodox debate and inter-Christian dialogue—namely, the authority of the primate and the role of councils in the thought and tradition of the Church.
Volume One examines the development and application of a theology of primacy and synodality through the centuries. Volume Two explores how such a theology can inform contemporary ecclesiology and reconcile current practices. Chryssavgis draws together original contributions from prominent scholars today, complemented by formative selections from theologians in the recent past, as well as relevant ecumenical documents.

EDITOR: JOHN CHRYSSAVGIS is the Archdeacon of the Ecumenical Throne and author of many books on Orthodox theology, spirituality, and ecology.

Praise for Primacy in the Church—

"This is an important two-volume work on the issue of primacy in the Church. The subject is significant, and has attracted attention resulting in the publication of numerous studies produced in many countries and in different languages. The relevant bibliography is enormous. The present work constitutes a selection of articles and short studies, and offers a very helpful picture of the various aspects, questions, and problems related to the central topic.

The contributors to the two volumes are well-known theologians who have dealt with the issue extensively. The editor and contributor of four articles, Fr John Chryssavgis, is to be commended and congratulated because he managed—cooperating with St Vladimir’s Seminary Press—to place at the disposal of Church authorities and theologians a valuable resource on a crucial issue."

~His Eminence Geron Archbishop Demetrios, Primate of the Greek Orthodox Archdiocese of America

"The theology of the Church has in the last few decades become once again an area of real interest and creativity, as our attention has been drawn back to the role of the sacramental Body of Christ in our human liberation into divine communion. Yet when it comes to the details of inter-confessional dialogue, the temptation is still strong to revert to familiar and comfortable positions, with—among other things—an assumption that historic polarizations over primacy and collegiality are fixed and given quantities. These excellent essays insist on going deeper. They do not pretend to resolve the issues that still divide Christians, issues over the charism of the Petrine office or the limits of sacramental fellowship or the authority of the episcopate; instead, they represent a clear and searching exploration of fundamental matters starting from first principles. We need more reflection of this quality. This book will be a major resource for all who believe that the ecumenical encounter is still a powerfully energizing context for theological thought."

"I have eagerly looked forward to such a publication on primacy and synodality in the Church, which is the central issue between the Eastern and Western Church. These two volumes include research from a broad range of leading theologians, predominantly Orthodox and Catholic, on the present state of such discussions. I have long been convinced that there can be reconciliation between East and West if the question of primacy is properly redefined and resolved, primarily on the Roman side: on the one hand, not solely as an authoritarian primacy of jurisdiction and, on the other hand, not simply as an ineffective primacy of honor, but primarily as an inspirational and mediatory pastoral primacy at the service of the whole contemporary ecumenical Church. In the recent past, John XXIII exemplified such a primacy; and today, the same could be expected of Pope Francis. His fraternal encounters with the Ecumenical Patriarch Bartholomew are a promising step forward in addressing these vital issues."

~Hans Küng, Professor Emeritus of Ecumenical Theology at the University of Tübingen

• Foreword , John [Zizioulas], Senior Metropolitan of Pergamon
• Introduction: Reflecting on the Future, John Chryssavgis
• The Principles of Accommodation and Forgetting in the Twenty-first Century,
Adam A.J. DeVille
• Primacy and Apostolic Legend: The Challenge to Christian Unity,
George E. Demacopoulos
• Does Primacy Belong to the Nature of the Church?, Cyril Hovorun
• Reflections on Authority and Synodality: A Eucharistic, Relational,
and Eschatological Perspective, Bishop Maxim [Vasiljević]
• The Canonical Tradition: Universal Primacy in the Orthodox Church,
Alexander Rentel
• The Ministry of the Bishop of Rome: From Doctrine to Modes of Exercise
Bishop Dimitrios [Salachas] of Gratianopolis
• The Ravenna Document and Canon 34 of the Apostles: The Position of the Patriarchate     of Moscow on Primacy
Bishop Kyrillos [Katerelos] of Abydos
• Vatican I: Papal Primacy within a Juridical Model of Church
Bernard P. Prusak
• Collegiality and Primacy in John Henry Newman,
Mark Reasoner
• Sentinel of Unity: Jean-Marie Tillard on Primacy and Collegiality
Brian P. Flanagan
• Primacy and Synodality: An Essay Review of Official Statements,
with Special Focus on the Ravenna Document, Nikolaos Asproulis
• The Synodal Institution: Reduction and Compromise,
Stylianos [Harkianakis], Archbishop of Australia
• The Place of the Papacy in a Historically Conscious Ecclesiology
Neil Ormerod
• Sister Churches and Problematic Structures, Robert F. Taft, SJ
• A Tale of Two Speeches: Secularism and Primacy
in Contemporary Roman Catholicism and Russian Orthodoxy
Brandon Gallaher
• Recent Trends and Tensions: Intra-Orthodox and Intra-Catholic Thinking
on Primacy and Synodality, Will Cohen
• The Orthodox Church and the Primacy of Peter: Are We Any Closer to a Solution?              Metropolitan Kallistos [Ware] of Diokleia
• Reflections on the Catholic-Orthodox Dialogue Concerning Primacy,
Walter Cardinal Kasper
• Afterword - Contemporary Ecclesiology and Kenotic Leadership:
The Orthodox Church and the Great Council,
John Behr and John Chryssavgis
• Index of Names and Subjects

On the Church (2-volume Set)