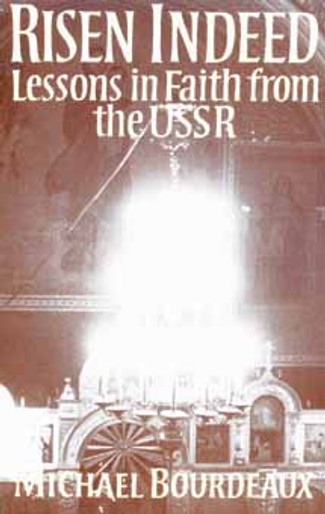 When this suffering goes on across the population of a whole vast modern conglomerate of nations, it can lead to a faith with a totally unexpected power and freshness. That is what Michael Bourdeaux believes is happening in Russia and he believes the rest of the world can learn much from it. He writes:

When I was a student in Moscow, Russia felt to me an alien land at first. Through my contact with Christians there during that year and on many other visits over the last twenty-three years, I have come not only to love Russian Christians, but to realize that the whole world has a lesson to learn from them. This book does not deal with persecution as such, but with the example of the suffering church from which the whole world can draw inspiration. Suffering deepens and redefines faith. Out of it has come a joy and a commitment which Christians elsewhere so often lack. The worse the suffering, the more intense their experience.

The Author:Michael Bordeaux is an Anglican priest and Founder and International Director of Keston College, an institute for the study of religion in communist countries. He is the author of numerous books and articles, including Opium of the People (1965), Faith on Trial in Russia (1971) and Land of Crosses (1979).