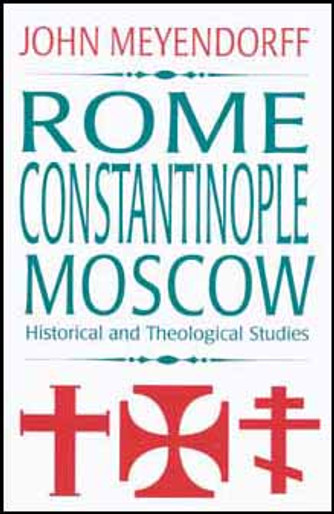 Gathered in this volume are studies on various historical and theological issues which have arisen between East and West over the centuries. These essays, characterized by Fr Meyendorff's typical brilliance and balance, discuss different aspects of the estrangement between the two halves of the Christian world and present an evaluation of several attempts at healing the schism. The problems related to the fall of Byzantium and the reuse of Russia as a major center of Orthodox mission and thought are also discussed.

Father John Meyendorff (†1992), former dean of St Vladimir's Orthodox Theological Seminary, is one of the pioneers of the modern ecumenical movement. As a historian of the church and patristics scholar, and as a longtime participant in numerous ecumenical encounters, he is uniquely qualified to present this evaluation of the search for unity between East and West over the last millennium. Prepared shortly before his untimely death, this collection of previously published and unpublished materials challenges the churches today to continue their search for authentic unity.

In a time when relations between East and West have suffered numerous setbacks in the former Soviet Union, in the former Yugoslavia, and elsewhere, Meyendorff calls upon theologians to remain ecumenical in their theology. What is really at stake, he affirms "is not the preservation of cultural categories shaped in the distant past, but the true 'catholicity' of the Christian message for the world today."

Primacy of Peter, The

Resurrection and the Modern Man, The