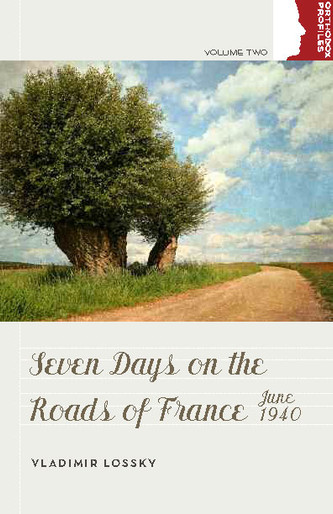 This book follows Vladimir Lossky's attempt to enlist in the French army after the Nazi invasion of France in 1940. It records his reflections on suffering; the true nature of Christian or Western civilization; the rightness or otherwise of war; the problematic relationship between Church and State; what we mean by a "nation"; and secularization. Such issues are mulled over, not as  abstractions, by someone who, as he walks across an increasingly war-torn landscape, quite literally has his feet on the ground.

This work will be a revelation to those who know only Lossky's more scholarly works -- here one discovers his rounded personality, his warm humanity, and his love not only of Christian France but of the West in general.

About the Author: Vladimir Lossky established himself as one of the most brilliant of Orthodox scholars in the years between his departure from Russia and his death in 1958. His uncompromising faithfulness to Scriptural and patristic tradition, coupled with his constant concern for an articulate Orthodox witness in the West, makes his works indispensable for an understanding of the theology of the Eastern Church today. Several of his works are available in English from SVS Press: In the Image and Likeness of God, The Meaning of Icons (with Leonid Ouspensky), The Mystical Theology of the Eastern Church, Dogmatic Theology: Creation, God's Image in Man, & the Redeeming Work of the Trinity, and The Vision of God.

Road to Emmaus: Pilgrimage as a Way of Life