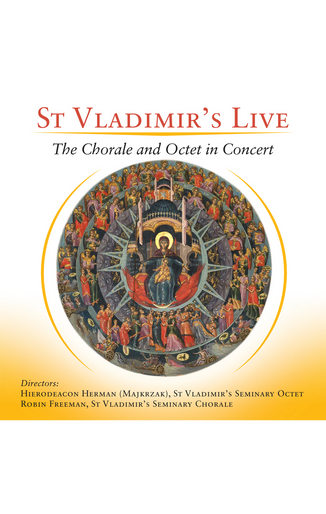 The choirs of St Vladimir’s Orthodox Theological Seminary are well-known for spreading the gospel through liturgical music. SVS Live combines selections from performances in the heart of New York City by both St Vladimir’s Seminary Chorale and the Male Choir.

The “Magnificat” concert by the Male Choir honored the Mother of God through festal hymns that celebrated her life of joy and sorrow, while the “Orient” concert by the Chorale wove together word and iconographic images, creating a stunning spiritual experience for concertgoers.

The selections from both recitals reflect several musical traditions of the Orthodox Christian Church, but resound the same powerful evangelical call to Jesus Christ and the new life He imparts to “those who have ears to hear.”

Hymns to the Mother of God from East and West were showcased in MAGNIFICAT, a concert that St. Vladimir’s Seminary Male Choir sang jointly with the Schola Cantorum of St. Joseph’s Roman Catholic Seminary, Dunwoodie. The St. Vladimir’s portion of the program, presented on this album, highlighted feasts of the Holy Virgin and of her Son. Beginning with her birth and entry into the Temple, followed by the great events of the Incarnation, the program proceeded on to the Paschal mystery of Christ’s Death, Resurrection, and Ascension, and closed with a hymn in honor of our Lady’s Dormition, followed by a simple prayer for her help and protection at the Second Coming and Judgement of her Son. Musically, the selections on the program were carefully chosen to integrate well with each other, even though coming from disparate liturgical contexts and diverse Orthodox chant traditions. The Russian tradition predominates, but two pieces were chosen from the Byzantine repertoire and ably arranged and directed by Rassem El Massih, who teaches at St. Vladimir’s. While nearly all the music on the program was composed for liturgical use, one piece—“Simeon was amazed,”—stands out because, though based on themes of Russian liturgical chant, it was in fact composed as a concert piece for this occasion. Thus, through song and text, the audience was guided through all the events of salvation history in a unique manner: from the standpoint of the Mother of God.  — Hierodeacon Herman (Majkrzak)

On May 7, 2012, the St. Vladimir’s Seminary Chorale presented ORIENT at St. Malachy’s Catholic Church in Manhattan, located just off Broadway in Manhattan. ORIENT combined a professional choral performance with the authenticity of Orthodox liturgy through a multimedia presentation of Orthodox liturgical music, texts, and images. The concert program included pieces from the broader Orthodox tradition sung in their original languages—Greek, Georgian, Estonian, Slavonic—as well as choral music by Orthodox composers written for the concert hall. This was accompanied by two projections of high resolution images of Orthodox icons and translations of music texts that ran simultaneously with the performance of the music. The images were not illustrations. They were intentionally chosen and programmed in relationship to the music/text being sung, much as iconographic programming exists in an Orthodox Church. The icons expounded the music/text, and the music/text expounded the images, just as is the case in the Orthodox liturgy. This concert approach combined the best elements of a professional choral performance with the depth and authenticity of the holistic Orthodox liturgical experience by juxtaposing music, text, and image. This resulted not only in a truly beautiful multimedia artistic performance, but it also presented a fuller and more authentic vision of the Orthodox Christian faith. Above all, this was an occasion for sharing the Gospel as expressed and taught in the Orthodox Christian tradition with hundreds of New Yorkers. — Robin Freeman

Every Day Will I Bless Thee