The 100th Anniversary of the Founding of St Tikhon's Monastery 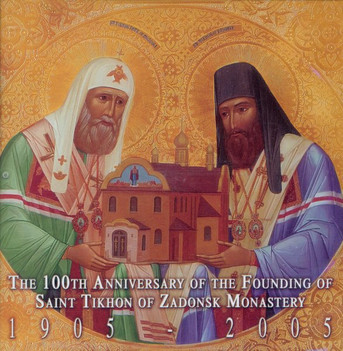 The 100th Anniversary of the Founding of St Tikhon's Monastery

Following a tradition established by Orthodox Christian faithful a century ago, thousands of clergy and lay pilgrims joined His Beatitude, Metropolitan Herman and the Church’s hierarchs over Memorial Day weekend to mark the centennial of Saint Tikhon of Zadonsk Monastery on May 27-30, 2005. Months before the pilgrimage, faithful from OCA parishes were invited to join what was to have been a 100-voice choir to sing the responses at the centennial Liturgy. To the delight of everyone, the choir that led the faithful in prayer consisted of over 200 singers, rather than the anticipated 100, under the direction of the Very Rev. Sergei Glagolev, which can be heard on this 2 CD recording. As one pilgrim enthusiastically stated after the Liturgy, “the choir was nothing less than magnificent!”